Bin Laden IS Dead, But Obama Didn't Build That!

This Presidency has been Photoshopped

(Update:  Awoke this morning to the news that unemployment miraculously fell to 7.8%!     I rest my case.)
Every aspect of this Presidency has been Photoshopped.  It’s been air-brushed, edited, manipulated, faked, phonied, cropped, distorted, misrepresented, massaged, tweaked, falsified, misreported, and staged.  What you see is not real.  Almost nothing you have been told about Barack Obama is true.  Ditto for Mitt Romney.  Even when you think you are seeing them speak in their own words, you are being duped.  That’s why Mitt Romney’s debate victory last night was such an unexpected surprise to so many.

The deceptions started from the moment Barack Obama walked onto the national stage.  Air-brushed was his work as a “Community Organizer”: a job title originated by revolutionary Saul Alinsky, who advocated for the destruction of our society in pursuit of an undefined utopia.  Unreported were Obama’s associations with terrorist Bill Ayers, Communist Frank Marshall Davis, anti-Zionist Rashid Khalidi,  racist Reverend Jeremiah Wright, and many others with similarly controversial ideologies.  Edited was his race baiting and divisive rhetoric aimed at previous administrations, white Americans, and the rich.  Cropped was his avowed affinity for “Marxist professors”, disdain for “typical white” people, and conflicting stories on everything from his religion, to his Mother’s death.  Unasked were any tough questions by the media or any follow-ups to his deceptive answers.

Once the campaign of 2008 got underway the Photoshopping went bipartisan.  John McCain was falsely accused of an extramarital affair in a huge front-page feature in the New York Times.  Misrepresented were his mostly moderate views.  Cropped was Senator Obama’s record as the most liberal member of the Senate.  Unmentioned was his nickname as the “Senator from Fannie and Freddie”.  Scrubbed was his distinction as the man who received campaign contributions from the “toxic twins” at a higher rate than any other public official.   Covered-up was his long-time advocacy for the very policies which were the immediate cause of the financial crisis:  subsidized mortgages for irresponsible borrowers.  Staged was Obama’s preferred meme for the cause of the crisis: greedy bankers, Bush, and The Republicans.

The Photoshopping then continued throughout Obama’s Presidency.  Unreported was the fact that the recession officially ended in June 2009, before Obama policies largely took effect.  Falsified was the fact that Obama’s nearly Trillion Dollar stimulus, printed out of thin air, added not a thimbles worth of net value to the American economy.   Lied about was the notion that Obama’s unprecedented government-run GM bankruptcy was somehow better than a normal lawful court-run bankruptcy.   Air-brushed has been Obama’s featherweight work schedule, a calendar filled with none of the markers of diligence…except to politicking, golfing, and recreation.  Buried was the unprecedented partisan nature of the entire ObamaCare process.  Photoshopped was Obama’s opposition to all of the Bush policies which led to the killing of Osama bin Laden (Live captures, Gitmo, interrogation, and wiretapping).   Unreported is the fact that under Obama, US casualties have doubled in Afghanistan, the soldiers we are training are murdering us, and we are now in full retreat throughout the middle-east.  Even Government statistics like Unemployment, Inflation, and GDP Growth have been manipulated to always paint a rosy picture no matter how awful.  (Just the other day it was breathlessly reported that housing prices rose handsomely, while the volume of homes remained low.  This was celebrated as an indication of improved economic conditions, instead of being reported as dollar weakness and inflation, which it most likely was, given the unchanged volume!)

Finally, lied about is the Presidents propensity to be on both sides of every single issue.   It is impossible to find an issue on which Barack Obama has not taken opposing positions.  These are not flip flops.  This is a deliberate smoke screen of cognitive dissonance designed to hide the revolution and maintain power.

The Presidential Campaign continues to be Photoshopped.  Edited were Mitt Romney’s 47% comments (The hidden tape of his remarks runs for over an hour, yet the 47% comment is abruptly cut-off just as he is likely to elaborate!).  Faked is an MSNBC clip that falsely paints Romney as churlish and petty.   An edited Mitt Romney gets almost universally negative coverage from both the US and foreign press.  Photoshopped images of Mitt Romney unable to spell his own name are taken as real and become punchlines.  Made-up comments make repeated rounds on Facebook and elsewhere, until the lies become mainstream.   Falsified is the image of Mitt Romney as a murdering, misogynistic, tax cheating, greed-head, who is mean to puppies.  Meanwhile, an air brushed Barack Obama gets universally positive coverage.  Unreported go the reprehensible cover-ups of Fast and Furious and the Libya debacle, skipped security briefs, failed Afghanistan policy, Iraq failures,  jailed filmmakers, support for the violent Occupy movement, dismal economy, compulsive mendacity, and on and on.

This could go on for pages, but the point is not to provide a history lesson.  The point is to say this:  if you were totally blindsided by Mitt Romney’s debate performance and equally surprised by Barack Obama’s, you need to think long and hard about your media sources.  You are being played like a Stradivarius.

Can't this guy even spell his own name?  Photoshopped! 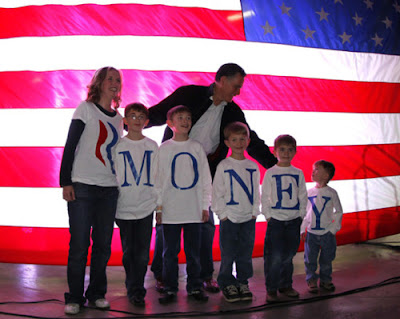 Media Summary of the 2012 campaign: 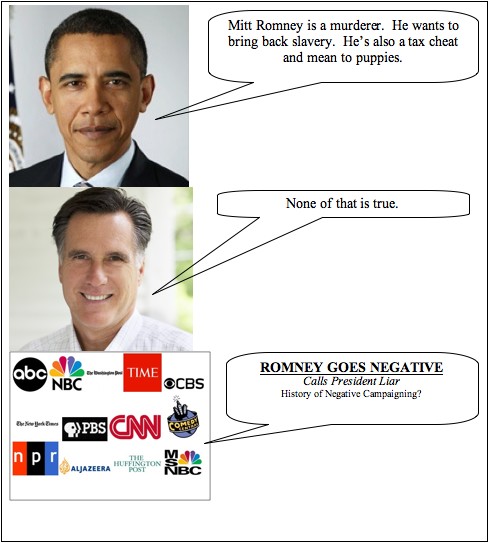