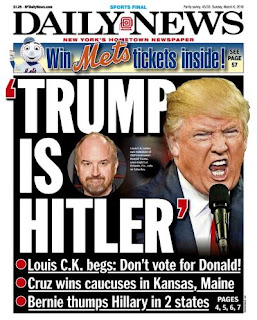 Consider the following words used to describe the President:


Notably absent from the above are these: “He’s Hitler, a Nazi, a Fascist".   That’s because those words were not available in the 1860s.  You see, those were all words said verbatim by Democrats about Abraham Lincoln, not just Donald Trump!

That's not to imply some equivalence between Donald Trump and the now revered Honest Abe.  It is, however, to imply that there are some striking similarities between what's happening with Trump and what happened with Lincoln.  In many significant and ominous ways we are reliving the disastrous 1860s.  That should concern everyone.

Here's the thing:  Democrats hated Abraham Lincoln for the same reason they hate Donald Trump; it all comes down to entitlements.

And that list doesn’t include the traditional redistribution entitlements like Social Security, Medicare, Medicaid, Food Stamps, etc.  Even Donald Trump’s just released budget doesn’t dare touch those entrenched goodies.  But it matters little whether or not a politician explicitly threatens to take the candy away.  The only requirement for drawing Democrat vitriol is the perception that an entitlement is under threat.

Thus, pretty much every Republican since the Progressive Era has been Hitler or equivalent.  Most recently, Reagan was Hitler, Bush was Hitler, McCain was Hitler.  Even Mitt Romney, perhaps the most decent man in America, a bishop in his church, was Hitler, wanted to bring back slavery, kept women in binders, and was a notorious abuser of puppies.

In both Lincoln's and Trump's cases, Democrat civil disobedience began immediately after the election.  Southern Democrat states began seceding right after Lincoln won.  Immediately following Trump's win, Democrats were in the streets protesting and in some cases being violent.

Most recently, several Democrat state and local governments have announced plans to "secede" by refusing to enforce certain federal laws. In response, Donald Trump has promised to withhold their federal funds.  This type of standoff is exactly what led to the battle of Fort Sumter, the first battle of the Civil War.  Fort Sumter took place six weeks after Lincoln took office.  Donald Trump has been in office about five weeks as of this writing.

If you think I'm exaggerating the danger posed by hateful rhetoric and demonization, consider that Betsy DeVos, the new Secretary of Education, vilified and threatened by Democrats and the teacher's union, has been placed under the protection of federal marshals.  The only other cabinet member ever needing federal marshals was a drug czar in danger of being snuffed-out by drug cartels!

Abraham Lincoln faced a similar situation from Democrat entertainers in his day.  An actor named John Wilkes Booth, whom Lincoln had seen perform only a week before, was the man who infamously shot him in the head.  As Booth jumped onto the theater stage immediately after shooting Lincoln he shouted, “Sic Semper Tyrannis!”, which if modernized would translate roughly to the headline above.  Donald Trump has already survived at least one bumbling assassination attempt during his campaign.

Dissent is a necessary part of democracy.  Hatred is a necessary part of dissolution and civil war.  Once Democrats convince themselves that half the country is made-up of deplorable fascist Hitler supporters, don’t they then have an obligation to eliminate them?  If you are convinced that any Trump supporter you know is evil, where does that logically lead?   Hateful rhetoric disguised as dissent can unintentionally paint impressionable minds into a dangerous corner with no peaceful way out.  We know what that led to in the 1860s.

Come on America, we’ve seen this play before.  Let’s not give it a sequel.

The New York Times has finally figured-out that Donald Trump is Al Czervik, the Rodney Dangerfield character from the classic 1980 comedy, 'Caddyshack'.  Welcome to the club.

I've been fascinated by the Trump/Czervik congruence since Trump announced his candidacy.  Both are over-the-top, ostentatious, boorish, real estate tycoon golfers who upset the establishment.  And both are oddly lovable to their fans.  In fact, of all the great characters in 'Caddyshack', Al Czervik is the most enduring and popular according to polls.

Here is a sampling of 'Caddyshack' scenes I've used to highlight the striking similarities:

Obamacare Replacement: How to Succeed in Three Simple Steps