Please forward to all the dog lovers you know!

New Campaign Ad for the 2014 Midterms

Seriously.  This is their position. 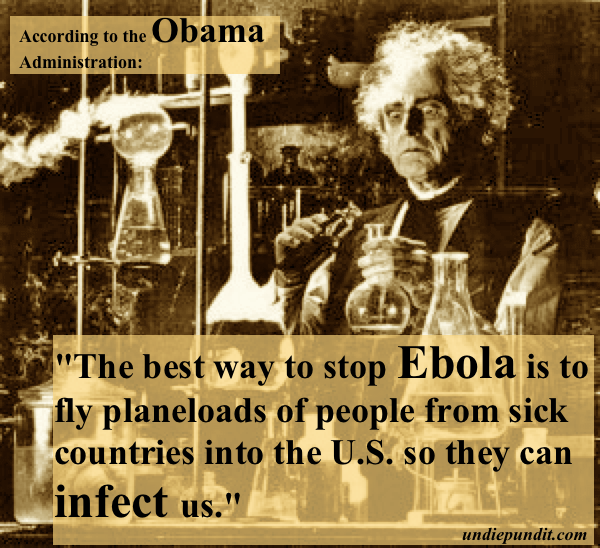 Posted by @RonaldReich5 at 9:46 AM No comments:

Nero Only Fiddled Once 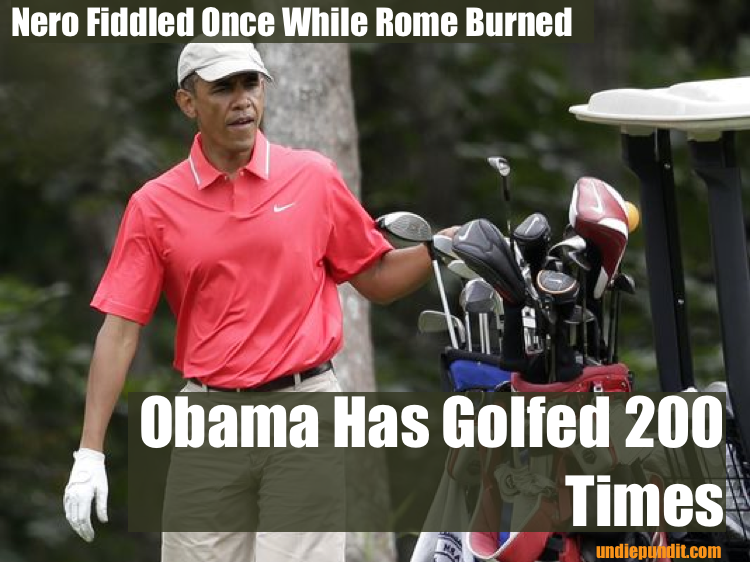 Is this the best way to prevent an epidemic? 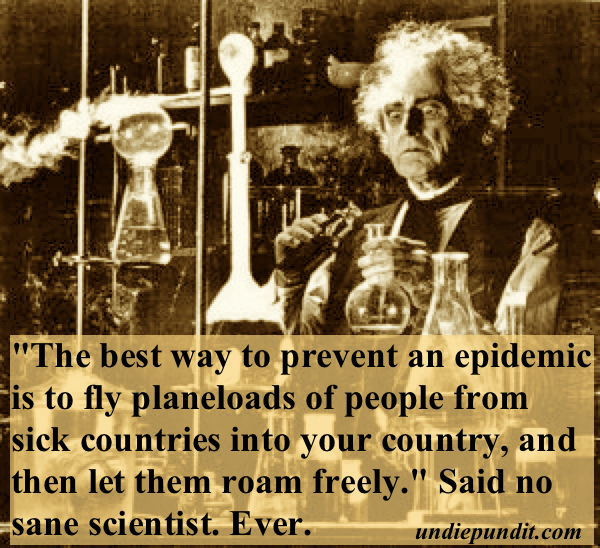 Posted by @RonaldReich5 at 9:16 PM No comments:

Normally, when I borrow an idea I will credit the originator.  In this case the originator deleted his tweet, and so shall remain anonymous.  The original was somewhat more provocative than my version... 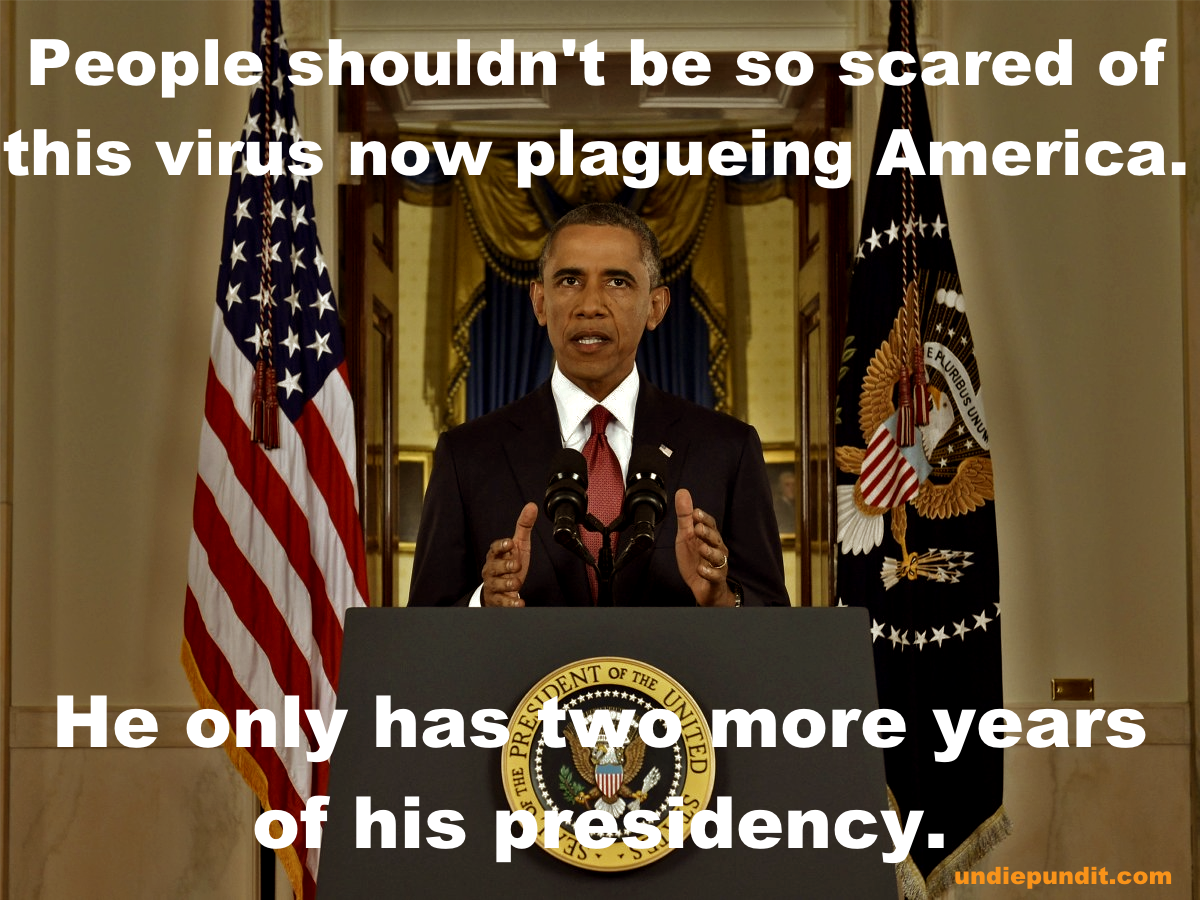 Why does Obama hate Fox News so much?

Yesterday Obama again singled out public enemy number one in a speech at Northwestern University.  No, not ISIS, terrorists, jihadists, Ebola, Putin, or the IRS abusing its power.  No, Obama singled out Fox News, of course, in front of a student audience.  In a country with a private media, a constitutional right to free speech, and a recent history of having government agencies persecute the president’s political foes, how can anyone let alone an auditorium full of young scholars tolerate that kind of abuse of power from the chief executive?  Not only did they tolerate it they applauded.

When I was growing up I always heard about totalitarian dictatorships and how they controlled their populations by controlling the media.  The Soviets were particularly known for this.  They had complete control of the media and could pretty much manipulate their people to believe whatever they wanted.  When I say media I’m not just referring to newspapers and TV news.  I’m referring to all sources of information in a society:  news, entertainment, and academia.

Which brings us to Barack Obama.  You probably don’t think of Barack Obama as a dictator.  He was democratically elected to be the president of a constitutional republic after all, so he cannot be a totalitarian dictator.   But consider this:  there are two ways a country can end up with a dictator -  a leader or faction can seize totalitarian power by force, or the people can grant totalitarian power to an individual or faction.  For all intents and purposes Barack Obama has been granted totalitarian dictatorial powers by the latter route.  In fact he is arguably the most powerful dictator the world has ever known.

Think about it.  Barack Obama is commander-in-chief of the worlds most powerful military, and is uniquely able to wage war without congressional votes or opposition from pacifists.  He has carte blanche to selectively enforce laws,  has carte blanche to write laws, dissolves borders unilaterally, creates treaties unilaterally,  has weaponized every tentacle of the federal government to persecute his enemies,  is politically untouchable and unimpeachable,  lies to the country with impunity, his deputies have been found in contempt of congress without repercussion, his policies have failed without repercussion.  And…he has been granted almost complete control of the media, with one BIG exception.

That one exception is Fox News.  News Corporation and it’s flagship Fox News is the only large media institution standing in the way of Barack Obama’s complete editorial control of major media in the USA.  While there are significant opposition voices on the internet (this blog being but a miniscule one), all of them combined pale in comparison to the reach of ratings leader Fox News.  In Barack Obama’s world the constitutional protections of free speech, a long history of tolerance, respect for private industry, and a disdain for political interference all become subordinate to the Saul Alinsky tactical imperative of winning at any cost.  Rule-of-law, the constitution, and tradition be damned, there’s a revolution to be won, wealth to be redistributed, and a nation to be fundamentally transformed!

Therefore Fox News must be stopped.  In accordance with the Saul Alinsky playbook Fox News must be mocked, ridiculed, disparaged, singled-out, personalized, and vilified.  Much like the Koch brothers who rank near #40 in political contributions but are enemy #1 in the Democrat pantheon of Alinsky targets, Fox News must be pounded and vilified non-stop.  And the useful idiots at Northwestern laughed and applauded.

Barack Obama is arguably the most powerful dictator the world has ever known – power willingly granted by the populace and popular media.  All that stands between him and complete totalitarian control, at least in his mind, is Fox News.

Why The Secret Service Isn't Concerned About Obama's Safety

Have you seen the many references to the mortal danger President Obama is in from potential assassins? The latest piece appeared today in the UK Guardian . I’m not surprised we are seeing these stories because racist whackos could be an additional threat for Obama, but make no mistake about it, Presidents face danger as all modern ones have found out.  That said, Barack Obama is statistically much safer than even George W Bush was!

The tragic fact is that virtually every modern president has been the subject of some kind of assassination attempt. Every one. That’s not to excuse it, but to highlight that danger is part of the office. The job is not for the faint-of-heart. Some nut is going to try and fly a plane into your house (Nixon, Clinton, Bush 43), or blow you up (Kennedy, Bush 41, Bush 43), or just try to shoot you (Truman, Kennedy, Ford, Carter, Reagan, Bush 43). And that is all of them post-WWII!

But, going back all the way, your chances of actually taking a bullet are almost twice as bad if you are a Republican. Five have been Republicans, (Lincoln, Garfield, McKinley, Ford, Reagan) and three have been Democrats (Jackson, Truman, Kennedy).

As far as actual assassinations, three were Republicans (Lincoln, Garfield, McKinley) and only one was a Democrat (Kennedy). In short, your chances of being killed are three times worse if you are a Republican! Moreover, Kennedy, the only Democrat was a tax-cutting supply-sider. If you look at it that way, Barack Obama will surely die in his bed as an old man.  Now, if he could only quit smoking…

(This was written in March 2010.  Hopefully Obama has quit smoking, but how would we know?)
Posted by @RonaldReich5 at 2:14 PM No comments: