Insanity is often defined as doing the same thing over and over again and expecting a different outcome.  That pretty much describes our approach to mass shootings.  How's it working so far?

Here’s a radical but eminently logical proposal to finally stop the kind of mass shootings that just happened in Texas:  Vote Republican!
I know. I know. You think Republicans ARE the problem!  Heck, they’re the NRA party, right?  How can Republicans possibly fix this?  And don't Republicans run Texas, where this happened?  Bear with me and I’ll explain...
The first thing to know is that Democrats have had either total control, filibuster control, or veto proof control of the federal government for the last 110 years.  That's right.  Despite what you've heard, this has been a one party country for over a century.  The last time Republicans had the Presidency, the House, and a super majority in the Senate was in 1909... when Theodore Roosevelt was President! Democrats have had complete control or filibuster control for the entirety of that time.  For about 25 years they had complete control, and for the remaining 85 years they had filibuster or veto control.  The last time Democrats had absolute complete control was waaay, waaay, back during the ...Obama Administration! What did they do to stop mass shootings in 110 years?  Nothing. At least nothing effective.

A fair question would be, OK, what if Republicans could get the kind of control Democrats have had, what would they do differently?  Here's a hint, and then some specifics:
The Democrat voting coalition is made-up largely of groups who are on some level dependent on the federal government.  Among them are the poor, minorities, the sick, the oligarchs, union members, government employees, social liberals, and single parent families. These groups look to the Federal Government for protection and  money, and therefore Democrats accrue power by maximizing their numbers.  Democrats want you poor, vulnerable, dependent, and afraid;  they have NO interest in solving problems that would prevent this.
The Republican voting coalition is largely made-up of individuals who seek independence from the federal government.  Among them are people of faith, much of the middle class, small and mid-sized business people, social conservatives, and nuclear families.  These groups look to the federal government for freedom and independence, and therefore Republicans accrue power by maximizing their numbers.  Republicans want you prosperous, secure, independent, and unafraid; they have EVERY interest in solving problems to promote this.
Now, who do you suppose wants people to live in fear of someone getting into a school, or mall, or concert, and committing mass murder?  Could that be why Democrats did nothing when they had the power for 25 of the last 110 years?  Could that be why an NRA supported bill since 2007 that would prevent dangerous homicidal maniacs from obtaining guns has never been passed?  Could that be why every time there is legislation to screen these people, Democrats insert a poison pill to kill it?  Could that be why Democrats torpedoed their own "Fix NICS" bill in 2018? (NICS is the database of gun purchases and background checks)  Could that be why Democrats have done nothing to find the SSRI, drug, gaming, and mental health connection between young people and mass shootings?  (SSRIs are the Prozac type drugs that treat mental illness and correlate with mass shootings)  And who do you think passed the laws that allowed Nikolas Cruz and so many others to escape the criminal justice system entirely?  Why do you suppose no one is ever held accountable for the failures when murderers are red-flagged, but not stopped?

But the biggest factor connecting all gun violence, black and white, is the breakdown of the family.  Of the 27 worst mass shootings in America, 26 of them were committed by men who grew up without fathers.  The same holds true for the weekly violence in the inner cities across America. Democrat policies since 1909 have grown the government ten fold, made people dependent, and shrunk the family accordingly.  The most effective buy-back program to stop this madness would be a buy-back program for fathers not guns!

Democrats have one solution: gut the Bill of Rights.  But would that solve anything?  According to Democrats themselves, banning assault weapons for a decade did nothing.  They ended their own ban under Bill Clinton.  Mass shootings happen all the time in countries without a 2nd amendment.  Some countries just use bombs and vehicles for mass murder.  The problem is not the tool, but the conditions that breed mass murderers.  And we are breeding them.
There was a time in America when every household had a gun, every kid could shoot, dynamite was sold in general stores, fathers were common, and mass murders were rare.

Democrats will never fix this problem because the incentives are for them to keep people afraid, vulnerable, and dependent.  Give Republicans the Presidency, the House, and over sixty votes in the Senate for the first time in 110 years and this problem gets fixed pronto, along with many others.  Or, keep voting Democrat and watch more innocent people die.  Your choice.
[UPDATE: And here's Ted Cruz confronting Democrats who filibustered his gun bill, Grassley/Cruz, which would have prevented almost every one of these recent mass shootings:]
Posted by @RolandRock1234 at 6:19 PM No comments: 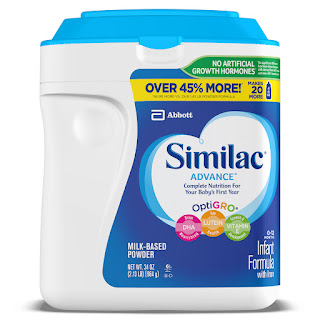 There's a lot of news about the baby formula shortage, but very little information as to "why".  I think I know why, and if I'm right, it's also why you're not hearing about it.

I have no special insight into the baby formula industry, but I've seen this movie before.  This exact movie.

You see, in 2014 I wrote a piece tying together several seemingly unrelated odd events at notable companies:  There was a SWAT style raid at a guitar factory, a large OTC painkiller plant was raided and shuttered, a fully built airplane factory was not allowed to open, and the U.S. government blocked the world's largest car manufacturer from selling certain models.

I traced all those cases to labor unions, or rather the conspicuous lack thereof.

It looked to me like Barack Obama was weaponizing the U.S. government to advance his pro-union agenda.  These companies were standing in his way, if not literally, symbolically.

I believe this is why moms can't feed their babies.  It has nothing to do with supply chains, covid, Ukraine, etc.  It's all about punishing a company that prefers to work directly with its employees rather than through an adversarial third party.

For background, here's an excerpt from my 2014 piece:

Labor unions are Obama’s largest support system.  Unions supplied billions in the last three election cycles, practically all of it to Democrats.  More importantly, unions supplied the boots-on-the-ground and the muscle for Obama’s vaunted ground-game. The labor union agenda is Obama’s agenda according to Obama himself. The most frequent visitors to the oval office are labor union bosses and labor union lobbyists...
These corporate/union bullying cases are similar to the IRS scandal in that government agencies were selectively targeting opponents of Obama’s political agenda.  But, there are significant differences too.  The IRS scandals broke because the targeted parties, non-profits and individuals, made a big stink.  In these corporate cases, the targets are for-profit corporations who will never make a stink.  Unlike individuals and non-profit groups, corporations have a huge incentive to keep quiet when being targeted by their government.  Corporations answer to their shareholders, and shareholders care about one thing only - share value.  Confronting abusive government is never a shareholder priority.  Corporations are also easily painted as villains.  When corporations get unjustly targeted by governments, they usually suck it up, pay the fines, settle the lawsuits, and quietly get back to work.

Now back to the baby formula case today:

About 3 months ago, the U.S. FDA shuttered the largest baby formula plant in the country, an Abbott Labs plant in Sturgis, MI.  The reasons for the plant closure was that there was a whistleblower who alleged sloppy hygiene at the plant, and subsequently there were a pair of fatalities from bacterial contamination allegedly tied to the plant.

Scary stuff indeed!  But further investigation revealed no such contaminants in samples of formula at the plant.  And none were found in any of the formula recalled from store shelves.  In fact, The FDA did not find any bacteria that were an exact match anywhere at the site.  If those children were killed by bacteria, there is no evidence whatsoever tying it to Abbott Labs.

Yet, the plant remains closed as of today.

All of this seemed familiar to me.  In fact, not just familiar, but exactly like what had happened with Johnson & Johnson's Tylenol plants.

Again, I'll direct you to the piece I wrote in 2014 which has all the details, but here's a brief summary:

Fast forward to 2011:
This is a mirror image of the events that have led to the baby formula shortage today.  And just like J&J, Abbott Labs is considered one of the country's best employers.  This usually means a preference for treating employees as individuals, which is anathema to unions.

Please read the full story from 2014.  This all has the unmistakable odor of an Obama/Democrat/Union operation.

(You might be saying, "Hey Undiepundit, are you implying that unions killed two babies to hurt Abbott Labs?"  No, I would never say that without verification.  In fact I tried very hard to get a statement from union headquarters, but unfortunately Jimmy Hoffa has yet to return my call.)

As if the union hit wasn't enough, Democrats also hate Abbott Labs for their deal with Donald Trump.  Recall that Abbott Labs was featured at a White House press conference in the middle of the pandemic where the President unveiled Abbott's new rapid test machine.  He then went ahead and contracted with Abbott for $750,000,000 worth of the machines which rocketed Abbott's stock.

(Notice how ABC mistakes Trump's FDA commissioner for his Treasury Secy.  LOL)
Posted by @RolandRock1234 at 2:12 PM No comments: