Cato: Perfect Storm of Ignorance
Posted by @RonnyReich at 9:07 AM No comments:

Where Have I Seen This Before?

So Barack Obama wants to sit down with Republicans and talk about healthcare. Thirteen months into his presidency and after shutting them out for the entire time, he wants to open a dialog. What ever happened to: “We won. Sit down. Shut up. We will clean up your mess. But we don’t want to hear from those who made the mess!”? Meanwhile, over at the House, Nancy Pelosi has announced that they are just going to bend some rules and ram the Democrat health bill into law with “reconciliation”, a ploy meant for budgeting and not major social engineering. Meanwhile in the Senate, Harry Reid has his own plan for sneaking his bill into law. This begs the question for Republicans; who is really in charge, and is there a credible partner for negotiating?

All these shenanigans remind me of what Israel goes through with the Palestinians. The Israelis make a deal with the elected leader of the Palestinians, who winks and nods to the militants, and they go and blow up a pizzeria or a bus. This cycle repeats on and on until finally the Israelis realize that there is no point in talking because no one is in charge! But they have to talk, because if they don’t, world opinion will turn on them even more than it already has for being a prosperous nation amidst all that Arab poverty. Besides, they get blown up whether they talk or not, so they might as well talk.

The Republicans, if they stay true to the Constitution and keep winning elections, will have learned a lesson that the Israelis have known for a while; Talk softly, but carry a big friggin’ stick!
Posted by @RonnyReich at 9:38 AM 1 comment:

Obama Really is the Messiah!

Barack Obama truly is The One, The Messiah, or at the very least, a major Prophet. He has managed to do something that hasn’t been done since slavery. No, not the American kind, I’m referring to the biblical Egyptian variety, back when Moses was The One they’d been waiting for. Like Moses, Obama has managed to unite the people and start them on their journey to salvation, and just like biblical Egypt, the people have found comfort in their founding principles and are heading back to the Promised Land. Unlike ancient Egypt, this time the people got united by accident.


But are we really united? Are we not a seriously divided nation? Yes, we are divided in many ways, but I believe we may be more united than we think. In fact, I’ll bet you a gazillion dollars that regardless of your political views, for roughly half of the last 2 years, you had zero trust in the guy in the White House, thought he was lying through his teeth, thought he was doing unconstitutional things, and were sick of seeing him on your TV. Does that describe you? Are we not united here? The point is, no matter who we trust or don’t, or who we vote for, roughly half the time, the other guys are in charge! And it’s not like the ones we mistrust ever go away. There are still laws on the books from Washington (yeah, that loser.) Heck, we still have that useless Louisiana Purchase Jefferson stuck us with! You think, your cool guy is in, and the other jerk is out? Think again.
Our government is like a giant nightmare version of the Garden of Eden that has never been pruned. Sure, it started out simple and beautiful when all we had was our Constitution, but along the way we bit the apple, and now anything can be justified as Constitutional. The Garden is an overgrown mess. When the Constitution can be anything, it becomes nothing. It’s as if everything ever planted in our Garden of Eden, good or bad, constitutional or unconstitutional, by every administration, has just grown, and grown, and grown, unchecked. How many federal programs, agencies, taxes, or laws can you name that have ever been phased out? Not many, right? Do you really want all those weeds clogging up your once heavenly Garden? Wouldn’t it be great if we could agree to do some trimming and weeding and get back to that Promised Land of Constitutional Government? See, we really are united!
After the State of the Union Address, Peggy Noonan, who writes a weekly op-ed in the Wall Street Journal, pointed out that Obama’s message was essentially (and I’m paraphrasing) “Washington is hopelessly broken, but if you allow us to control your entire life, we’ll make sure all your healthcare, energy, climate, automotive, banking, defense, housing, food, drug, and employment needs are satisfied.” Yeah, right. It’s laughable on its face, especially when you realize that half the time, the people in charge of your entire life will be the untrustworthy, lying, stupid, jerks you voted against! And say what you will, none of that is in the Constitution.
Unwittingly, Barack Obama has become our savior. I’m not suggesting that he is doing anything right, in fact, by being so spectacularly wrong, he has become the Prophet his followers promised. Look around. Everywhere you turn the pendulum is swinging back and this swing is bigger and more profound than any in the past. Of course, the pendulum is always swinging. Remember how after Bill Clinton’s “character” issues, the pendulum swung to Bush 43 who ran on bringing dignity back to the oval office? And after Bush’s lack of brains and communication skills, the pendulum swung to a much smarter guy? Notwithstanding the fact that he thinks there are at least 57 states, can’t pronounce Corpsman, and needs a TelePrompTer to talk to school kids; he really does sound smart most of the time.
(Not to get sidetracked, but speaking of sounding smart, when Obama talks about economics or defense in particular, he reminds me of a character in “Fast Times at Ridgemont High”. Remember Mike Damone, the sleazy cool kid who talks a slick game about the ladies, but eventually gets exposed as a complete novice and fraud? Here’s some dialog I clipped from IMDB:
Anyway, Obama reminds me of a pseudo-intellectual Mike Damone. Yeah, it’s a stretch, so what, who cares?)


Getting back to the pendulum, this swing started long before Barack Obama became President. Don’t you remember feeling helpless as Bush was shepherding the tragic TARP bill through? You probably had the same feeling when congress unanimously passed the first stimulus bill and Obama was not President then either. Ditto when Bush expanded federal control over education and prescription drugs for Medicare. Yeah, this swing of the pendulum has been going for a hundred years and it’s about the Constitution and its demise as a check on federal power.
I realize this is a familiar charge. Whenever we don’t like what a politician does, we yell “Unconstitutional!” Remember the outcry over Bush’s warrantless wiretaps? It’s the oldest charge in the book, but can you ever remember it getting traction before? Why now? And why is Obama the Prophet if he didn’t even start the pendulum swinging?
Because Obama gave the pendulum such a huge push! Nobel Economist Milton Friedman used to refer to the “Frog-in-the-Pot” analogy when discussing the shredding of The Constitution. That’s the classic analogy about dropping a frog in a pot of boiling water only to see it jump right out. Put that same frog into a pot of cool water, slowly bring it to a boil, and you’ll soon have a happily poached frog. In this case, we are the frog, and the flame cooking us is being stoked by the bi-partisan enemies of The Constitution.
Obama has turned up the heat so much in such a short time, that the frogs are jumping in droves. Would there have been Tea Parties if McCain had won the election? I doubt it. John McCain would have been almost as much an enemy of the Constitution as Obama. He wanted many of the same things. Heck, Obama hasn’t been overturned by the Supreme Court as far as I know! That’s an honor few can share with John McCain. But still, I think we would have behaved quietly as we did under Bush. We would have just enjoyed the warm bath like the compliant frogs we are. But instead we see this today: 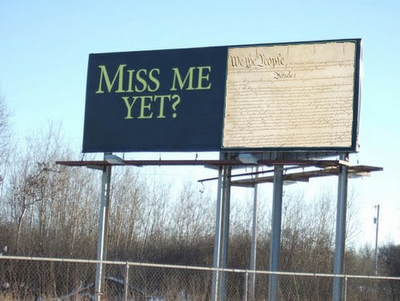 Photoshop Hat Tip: www.humblelibertarian.com via www.michellemalkin.com
So what changed with Obama?
Yes, absent Obama we’d still be dozing off in that pot waiting to become frog soup, but his brazen Coup d’état woke us up. (Yes, I think you can call it a Coup even though we elected him. And the “p” is silent like in Corpsman for those keeping score.) In this case, it's The Constitution, not the government which Obama and the Anti-Constitutionistas seek to overthrow. Luckily, we are now awake.

Thanks to the Obama awakening, concerned Americans are protesting in the street by the millions. Massachusetts, of all places, just ended a super-majority in The Senate. The Obama Administration is retreating on every single one of its agenda items. No incumbent from either party is a sure thing unless viewed as a strict Constitutionalist. John McCain is being challenged in his home state from within his party. Atlas Shrugged is a bestseller. People are once again reading the Constitution, The Declaration, The Federalist Papers, and reviewing American history. For Chris sakes, one of the highest rated cable news shows is a guy teaching American history at a blackboard at 5 O’clock!


These are nothing short of miracles. Barack Obama is indeed the Messiah.

Posted by @RonnyReich at 6:29 PM No comments: