A Failure To Communicate

Donald Trump gave his Oval Office address on the border last night.  Chuck Schumer and Nancy Pelosi gave their response.  Unfortunately, for the American people, the two speeches displayed the futility of politics today and the insanity of abandoning limited government as we have.

The President used facts, statistics, and real life stories to bolster his argument.  He showed respect for his critics and made no moral judgements about their opposition.  The Democrats denied there was a problem in the first place, though they didn't refute any of the Presidents statistics or anecdotes.  They showed nothing but contempt for anyone who disagreed with them, accusing them of immorality, racism, and stupidity.

I'm not sure what the final outcome of all this will be, but the President seems to have won this round.

And then there were the optics: 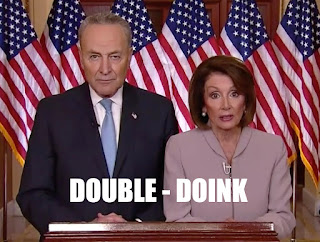 Posted by @RonaldReich5 at 6:43 AM No comments: