Fact Check: Why is Canada Doing So Much Better Than The U.S.? [UPDATED] 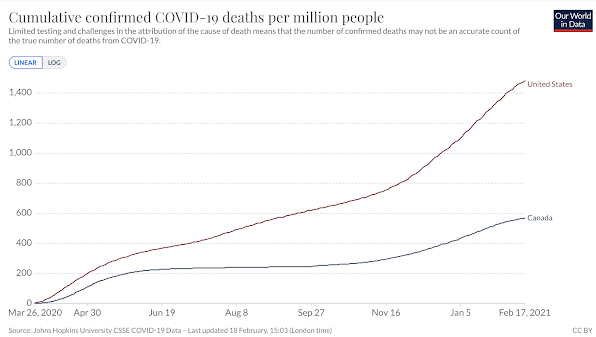 [This piece has been UPDATED and flips the original conclusions.  See below.]
I don't mean to beat a dead horse.  I realize most people are dug-in when it comes to the off-patent treatments for COVID.  Some trust the studies that claim they work, and some trust the studies that say they don't.  (For a complete list of all the studies on these and other therapies, go to c19study.com)
For example, I made my mind up a long time ago on Hydroxychloroquine (HCQ) and wrote about it here, here, and here.  Most of the countries I had researched that had unusually good outcomes, like South Korea, Greece, Norway, Egypt, India, Israel, and dozens of others, had at times embraced the use of HCQ, often with zinc.  More recently many have employed Ivermectin (IVM), which seems to be the most effective to date.  [UPDATE 4/26/21 - Uttar Pradesh, India's most populous state with 230 million people, is the only state that hands out kits with Ivermectin, Hydroxychloroquine, Zinc, D3, etc to anyone regardless of PCR test results, and it has been relatively unaffected by the recent deadly spike in India.]
But one country puzzled me: Canada.  Canada has been very successful [see UPDATE at bottom!] with Coronavirus but did not use Hydroxychloroquine or Ivermectin.  Moreover, Canada, if anything would be expected to fare worse than its sunnier neighbor to the South.  But that's not the case.  Canada is doing almost three times better than the U.S. in deaths per million population.  That translates to the equivalent of about 300,000 lives saved!
I finally looked into this and found a possible culprit, or should I say, a possible secret: Colchicine.  Colchicine is chemically distinct from HCQ but shares some interesting similarities.  Both originated long ago as plant based medicines, and they both have strong anti-inflammatory properties that are not fully understood.  Moreover, both seem to benefit Coronavirus infections.  Colchicine is not known as an antiviral, but with what we've learned about zinc ionophores, ie chemicals that transport zinc into cells, that may change.  [CORRECTION: Colchicine is a known antiviral.]
Canada approved the use of Colchicine for Coronavirus last summer.  It is the only approved pill based treatment for early COVID in Canada.
The fact is, outlier countries that have unusually low death rates have at least one pill based early outpatient treatment recommended for Coronavirus.  It doesn't seem to matter which one they choose, as long as they choose at least one.  India, one of the best performing large countries, has several and makes them available for free. [UPDATE only Uttar Pradesh, India's largest state, does this and they are among the best performing states during India's deadly second wave.] But in the U.S., we literally have NO early pill based approved treatments: not HCQ, IVM, DOX, AZ, Colchicine, Quinine, Artemisinin, Favipiravir, or any of the others being used around the world. None.
In fact, the official U.S. protocol for treating early outpatient Coronavirus and COVID is identical to the protocol for the common cold: isolation, fluids, & rest.
That's why we are dying at a rate that proves we have perhaps the dumbest medical bureaucracy on the planet.  But not just dumb, criminally dumb. (Yes, I'm looking at you Dr. Fauci.)
[UPDATE:  I used population normalized deaths for this analysis and that may have been a mistake.  My assumption was that case fatality rates were so skewed by testing rates that they have lost meaning.  That may not be true for a number of reasons.  As it happens, Canada continues to have a significantly HIGHER case fatality rate than the U.S. AND is experiencing a current spike in cases (March, 2021).  Their lower death rate is entirely due to lower cases and that is changing.  Bottom line: at this point Canada is not doing so well, and Colchicine does not appear to be changing much of anything.  We'll keep watching though.]
Posted by @RonaldReich5 at 10:10 AM No comments:

Is Dr. Stella Immanuel right?  Does she deserve an apology? Did all those people die needlessly?
I can name dozens of qualified Doctors and scientists off the top of my head who tried their level best to get the word out that there was no need to die from COVID-19.  People like Didier Raoult, Chris Martenson, Zev Zelenko, Paul Marik, Pierre Kory, Simone Gold, Jane Orient, all the Dr.s at America's Frontline Doctors, and all the Dr.s at The Front Line Covid Critical Care Alliance did what they could.  Even Donald Trump made an early attempt.  But, all were suppressed, cancelled, ridiculed, and publicly shamed. Many lost their jobs. They all deserve apologies. They've all been vindicated.  And what's more, anyone who ridiculed them and spread misinformation about these therapies should be shamed and sued into oblivion.
There was just too much money and power at stake for these cheap remedies to be allowed to succeed. Fake studies proliferated claiming they were useless and even harmful.  The media ran with the fake studies.  The medical bureaucracies, beholden to the pharmaceutical industry and aligned against Donald Trump, ran with the fake studies.  Your own doctor (and mine) ran with the fake studies.
The fact is, these early treatments were well known from day one to be effective.  Countries that adopted them in early outpatient settings have radically better outcomes.  At current rates, India has one death from COVID for every 123 we have in the U.S.  They hand out Ivermectin, Hydroxychloroquine , Doxycycline, D3 and Zinc to their people. They are saving millions of lives and it costs them under $3.00 per citizen.
[UPDATE 4/26/21 - Only one state, Uttar Pradesh, hands out the Ziverdo Kits for early outpatient treatment and they have been relatively unaffected by India's recent sharp spike in infections and deaths.  Uttar Pradesh is India's most populous state with 230 million people.  Today I saw that India's top medical bureaucracy for the central government just endorsed Ivermectin and Hydroxychloroquine for the first time.  Hopefully that will have a positive impact in some of the hardest hit states like Maharashtra and Delhi.]
Bottom line: we killed hundreds of thousands of our own citizens knowingly and maliciously to help Big Pharma make billions and to defeat Donald Trump.  It is a genocide-level crime.
And among the criminals I hold responsible, a dishonorable mention must go to Dr. Anthony Fauci.  Not only did he champion the very experiments that likely led to the creation of this virus, but he funded them and lied about it. He was at the top of the chain-of-command when U.S. taxpayer money went to the Wuhan Institute of Virology to pay for the very reckless "gain-of-function" experiments that created this FrankenVirus.
But Fauci's lies did not stop there.  He also lied about masks, Hydroxychloroquine, Remdesivir, and the significance of randomized controlled trials.  More than anyone else he is responsible for not only the origin, but the tragic handling of this virus as well.
Of course it is only fitting that Anthony Fauci is the highest paid person in our entire government and the most respected voice on matters of all infectious diseases, including this virus. What a truly insane world we live in.
[For links and summaries to every scientific study done on HCQ, IVM, D3, ZINC, C, and more, go to:  c19study.com ]
[UPDATE: Anthony Fauci was just awarded a $1 million Israeli prize for "defending science".  Can't make this shit up.]
Posted by @RonaldReich5 at 3:11 PM No comments: