Fact Check: The Truth About Our Two Party System

You've heard it your whole life; we have a two party system in the U.S. where power flips back and forth between the Dems and the GOP.  Sometimes Democrats control the government. Sometimes Republicans do.  And it's all more-or-less in balance giving us a wonderful diversity of governing philosophies. Yay us!

In order to truly have control, a party must have the Presidency, a majority in the House, plus 60% of the seats in  the Senate.  Prior to 1975, Senate control required 66%.

That's because the Senate has a rule that prevents simple majorities from bringing legislation to the floor.  If one party has 51 Senators, they must find 9 votes from across the aisle in order to advance a bill.  This necessitates compromise of one sort or another.  It also empowers minority parties.  Any  minority party with at least 41 votes effectively has veto power over any bill it doesn't like.

For the first two years of the Trump Presidency, Republicans had simple majorities in the Senate and the House.  It was said that Republicans controlled everything.  But without a supermajority in the Senate, they couldn't even do basic things they had run on.  They also had several members who caucused with the Democrats on big issues like Obamacare.

Only when one party has a cohesive supermajority in the Senate, a majority in the House, and the Presidency, can it truly be said that they are in control of the federal government.

When that Senate was voted-in, the President was Theodore Roosevelt, WWI was still years away, and Total Government Spending was about 7% of the private sector.

When Democrats didn't have complete control, or near complete control, they still had veto control in the Senate.  After 110 years of this, Democrats have taken Total Government Spending from about 7% in 1909, to about 70% of the private sector during Obama's eight years.

So do we really have a two party system in our federal government?  In theory, yes, but in practice, we are a one party country.  Democrats have had either total control, near control, or veto control of the federal government's legislative agenda for the entirety of the last 110 years.

Here's the result in graphic detail: 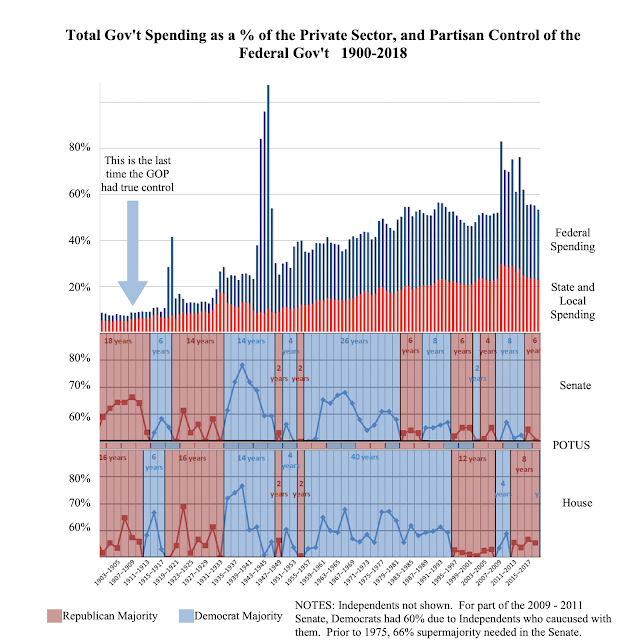 Do you see any patterns on the above graph?  (Click on the graph to see it in higher definition, or to zoom-in.  Hint:  Recessions are visible as prominent bumps in the State and Local Spending (red) part of the graph.)

NOTE: Independents are not shown.  Independents who caucused with Democrats put them over the top for part of the 2009-2011 Senate,  and got them within 1 vote of supermajority in the 1993-1995 Senate.