If the NFL really has a problem with abusing women, they will run this ad during the Superbowl.   Otherwise NFL, please shut-up.

Posted by @RonaldReich5 at 1:13 PM No comments:

It’s Superbowl week, Greece just elected a Communist government, and Barack Obama has indicated he has no intention of changing his strategy, even after his historic mid-term rebuke.  It’s a perfect time for me to bravely attempt to tie these disparate things up in a neat little bow.  What’s more, I will do it with fully inflated analogies and rhetoric.

Now suppose you were a committed Marxist who inherited the Smithian team.  How would you convert them to your preferred system?

Karl Marx addressed this dilemma back in 1848 and prescribed violent revolution.  Of course, his world was vastly different from ours (and I don’t think he was thinking about football!).  Modern Marxists have searched for a less kinetic approach.  This has split the Marxists into two groups, one that still favors violent revolution and direct confrontation, and another that favors democratic revolution and indirect confrontation.

Among the thinkers who preferred the latter approach were two people at Columbia University, Richard Cloward and Frances Fox Piven.  Their theory was that if Smithian economies were overburdened by progressive Marxist redistribution, they would eventually collapse in on themselves and Marxists would become the democratic majority.  The spark for the strategy was a tactic from Saul Alinsky, “Make the enemy live up to their own book of rules.”  In other words, load up on debt, dependency, and obligations, and then blame the Smithian system when it reaches a crisis.  This would achieve the same result Marx had prescribed, only politically and without violence.

This is exactly what has happened in Greece.  The Greek system collapsed in on itself because they had created a progressively redistributive system that resulted in a majority of the electorate being dependent on government.  This resulted in a massive debt burden that eventually became a crisis when the debt got downgraded to junk.  As a Euro member, Greece could not unilaterally print money to pay off its debt, a strategy countries have used throughout history.  Backed into a corner, the Greeks chose Communism, just as Cloward and Piven predicted.

So, what’s this got to do with Barack Obama?

What would a committed Marxist in the Cloward and Piven mold do if he obtained power in the US?  Would he work tirelessly for government rules to subsidize mortgages for those who cannot afford homes in the hope that it might collapse the system?  Would he maybe run up more debt in eight years than all previous presidents combined?  Would he reduce workforce participation and greatly increase government dependency?  Would he work tirelessly for progressive redistribution of wealth?  Would he avoid any direct Marxist or Socialist language and instead fall back on vague terms such as “hope” “change” and “fundamental transformation”?  Would he possibly nationalize healthcare, student loans, community colleges, daycare, etc. in an attempt to consolidate votes, and eventually collapse the system?  Would he try to flood the voter rolls with dependents and illegals?

If you have followed Barack Obama and his past, you would know by now that he attended Columbia University and was introduced to the Cloward and Piven strategy there.  You might also know of his affinity for Saul Alinsky and his roots as an Alinsky Community Organizer.  You might also know that Frances Fox Piven was all but present at the signing of Obamacare.  You might also know that she is among those behind Obama’s recent executive action on immigration.   What you probably don’t know is that she, and the then living Richard Cloward, were present at the signing of Bill Clinton’s 1993 “Motor Voter” bill. 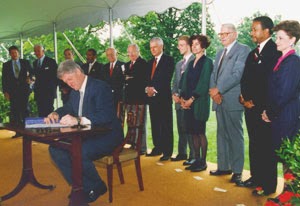 That's them right behind Clinton.  Do the math.

Incidentally, which football team would you bet on long term, the Marxists or the Smithians?

(UPDATE:  An earlier version of this post placed Frances Fox Piven at the signing of Obamacare.  That was likely incorrect.)
Posted by @RonaldReich5 at 2:31 PM No comments:

Barack Obama did a lot of bragging last night in his SOTU.  Unfortunately, every one of his bullet points needs an asterisk – a big asterisk:

·   On the Economy, Obama touted a host of positive economic results that have shown improvement since he became President.  *Unfortunately, what he will not mention is that he, or more accurately his philosophy, was to blame for the financial crisis that he supposedly “inherited”.  He did not inherit that mess, he caused it!  Redistribution of wealth, in this case redistribution of mortgage credit, was at the heart of the Affordable Housing Initiative that was begun in the 1990s by Democrats under Bill Clinton, and reached it’s apex in 2007 while Democrats, including Senator Barack Hussein Obama, ran congress.  No member of congress took more campaign money at a faster clip from Fannie Mae and Freddie Mac than Senator Obama.  Fannie and Freddie were ground zero in the subprime crisis, and Barack Obama was the subprime king.  This aspect of his past has been completely expunged from the historical record.  This is the mother of all asterisks.
·   Two other big asterisks in the rosy economic picture:  Interest rates and debt.  *No president in American history has had an easier Federal Reserve policy, and no president was ever been given carte blanche to spend, borrow, and print money like Barack Hussein Obama.  Obama has borrowed, printed, and spent  $11 trillion appropriated from future generations - an unprecedented amount ($3.5 trillion from QE I, II, III, and $7.5 trillion in new borrowing).  If $11 trillion were distributed directly to the people, every family could be given $140,000 in cash!  And no president has had a 0% Fed funds rate for his entire presidency.  Not even close.
·   There was a lot of bragging about helping the middle class.  Claims were made about rising wages.  None of it is true.  *Median wages have been falling since Obama became president, which is why polls show Americans still perceive we are in a recession.
·   One of the biggest reasons for recent economic optimism is the decline in the cost of energy.  The asterisk:  *none of this is due to Obama, Democrats, or federal  policies.  It all came from private initiatives and state laws that permit fracking, horizontal drilling, and steam extraction.
·   Obama wants more government intervention in childcare, education, and of course, healthcare.  The asterisk:  *the more government gets involved in childcare, the more kids grow up without families and end-up in a life of crime and dependency.  Government intervention in education and healthcare is precisely why both these areas got to crisis levels of inflation and mismanagement.  More government will lead to more of the same.
·   Obama bragged about ending the war in Afghanistan. Afghanistan asterisk:  *actually, Bush had essentially decided that our goals were achieved in Afghanistan and he had already drawn down our forces.  Obama surged troops back into Afghanistan and nearly tripled our casualty rates (Bush = 630, vs Obama = 1726)!  Nothing more was gained from these additional deaths.  You probably didn’t know these numbers, right?
·   Obama bragged about a victory over terrorism (though he cannot get himself to admit that Islam has anything to do with it!).  The asterisk:  *really?  Anyone paying attention knows this is complete bullshit.  ISIS, Iraq, Libya, France, Yemen, Nigeria, Syria???  Hello…

I could go on but what’s the point.  Obama still has about half the country mesmerized by his propaganda, which is aided and abetted by the pop media, pop culture, and pop academia.
Posted by @RonaldReich5 at 9:59 AM No comments: 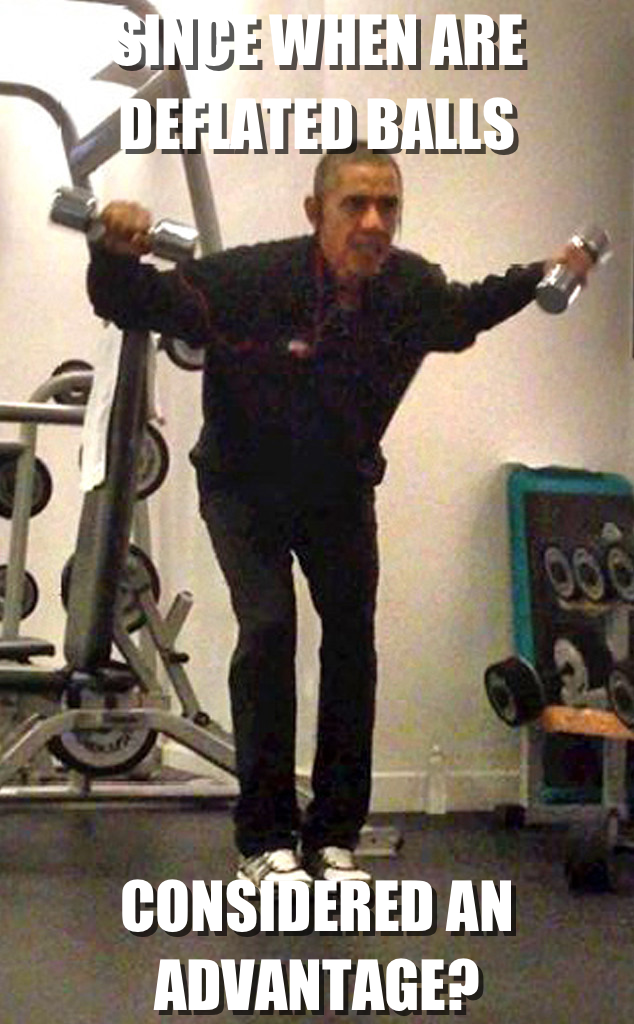 Posted by @RonaldReich5 at 1:53 PM No comments:

I’m done.  I will not support you if you seek the presidency in 2016, even though I did so quite enthusiastically in the past.  Look, I have nothing but respect for you.  I’ve even made phone calls on your behalf, donated to your campaigns, and argued your merits to anyone who’d listen.  And I still think you’d make an exceptional president!  But, the fact is, at least for this supporter, you have disqualified yourself as a candidate.  Here’s why:

Those trade secrets and playbook are readily available in the writings of Saul Alinsky.  Have you read them?  Have you studied them?  Have you devised counter tactics?  I seriously doubt it because you’ve been blind-sided time and again by Alinsky tactics.  Ever since Bill Clinton, Democrats have won every election in which they stuck closest to the Saul Alinsky playbook.  If you had absorbed those lessons and understood how to counter them you might have won.  Instead, you naively ran straight into an Alinsky buzzsaw.  To this day, I’m not sure you understand how you were Alinsky-ed.

Just about every turning point in the last campaign hinged on Alinsky tactics.  The “war on women”, binders full of women, dogs on car roofs, the 47% kerfuffle, ads about the woman who died of cancer, the haircut story, the car lift, the horse, and on and on were all straight out of the Alinsky playbook.  Even the Candy Crowley debate fiasco was manageable had you understood Alinsky.

Then there were the unforced errors, which again could have been avoided with a basic understanding of Alinsky.  “Obama’s a nice guy, but he’s in over his head.”  “Obama didn’t cause the financial crisis, he inherited it.”  “Obama deserves credit for getting bin Laden.”  All examples of huge unforced errors.  If you’d like a detailed accounting of why these were the wrong things to say, (aside from them being flat wrong!) please read my post mortem from December 2012, “Why Romney Lost”.

Here’s another hypothetical:  If you were hiring a marketing executive, would you hire someone who had unfettered access to free advertising but failed to use it?

Ever since Ronald Reagan, Republicans have won every election in which they understood that the news media, entertainment media, and academia would be aligned against them, and that they therefore must go straight to the voters - especially to their base!  You sir had unfettered access to conservative talk radio, a medium that reaches millions of Republican base voters each day, and you gave them the Heisman!

I witnessed you passing up these gimmees throughout your time on the national political stage, and it made me want to tear my hair out.  I simply can’t take it anymore.  (Plus, I’m running out of hair.)

Mr. Romney, you’re an amazingly accomplished person.  You are no dummy.  But you’re a “saint”, a Mormon Bishop, and you are ill equipped for the devils domain of today’s Alinsky politics.  Hillary or no Hillary, 2016 will be all Alinsky all the time.  Sorry Mitt, this ain't your game.  No mas.

P.S. Dear reader, please forward this to any Republicans you know in the hope that someone in Romney’s circle might perhaps see it and save us, and him, the humiliation of another embarrassment!

Hey, I think it's great that so many are showing solidarity for free speech in the wake of the massacre at Charlie Hebdo by Islamic extremists. But, how many spoke out after Benghazi when those murders were blamed, not on the attackers, but on a guy who posted a video on YouTube? Obama made a speech at the UN and all but blamed Nakoula Basseley Nakoula in front of the world saying, "The future must not belong to those who slander the prophet of Islam". Then he had him arrested and put in jail for a year. No one said a word.
Posted by @RonaldReich5 at 6:07 AM No comments: