Barack Obama elbowed his way into our living rooms the other day and stole a quarter hour of our time to lecture us with the most vacuous poll-tested drivel imaginable from a President of the United States. I’ll leave the political analysis for the experts in that area and instead focus on the economic logic of President Obama’s poll-tested “balanced approach” to raising the debt ceiling.

By “balanced approach”, President Obama is referring to a mix of new revenues from higher taxes combined with some unspecified spending cuts. Sounds reasonable right? After all, why not use every tool available, including revenue, to close this dire budget gap? Besides, isn’t it Democrat lore that Bill Clinton raised taxes AND balanced the budget? Unfortunately, none of that is plausible, despite making for potent political rhetoric. Let’s review:

First of all, there is a ceiling on the amount of total tax revenue that can be collected and sustained. That amount is 18% of GDP.  That’s not some number I’m making up. That number is proven by over 65 years of US tax collecting history and all the proclamations of politicians to the contrary cannot undo that reality. The top marginal rate fluctuated from as high as 92% to as low as 28% during that 65 year period, but the total take stayed rock solid OVER TIME at 18% of GDP. This is remarkable and irrefutable. Meanwhile, spending is at 25% of GDP and rising fast under the Obama spending blowout. Tax revenue cannot bridge the gap between 18% and 25%. Only lowering spending and growing GDP can do that, and tax hikes can only impede those goals.

Mention the above to any fan of higher taxes and they will immediately shoot back: “What about Clinton? Didn’t he raise taxes and balance the budget?” Ah yes, the Clinton “beer goggles” are potent indeed. Sure, Clinton did raise marginal tax rates on the very rich in 1993 from 31% to 39.6%, but he was also dragged into an across the board drop in the long-term capital gains rate by the Republicans who were swept into power in 1994. That drop, which eventually became law in 1997, was from an EFFECTIVE rate of 29.19% to 21.19%.*  Remember, the income tax hike was only on those earning more than $250,000 while the lower capital gains rate was available to any tax-payer. The cap-gains drop actually had a more marked impact on revenue and growth as evidenced by the proliferation of tech-boom stock options and a stock market rally which began on the day after the election of the Republican congress and which fueled both metrics. In other words, Clinton ended up being a net tax CUTTER, and that fueled short term revenue growth as well as GDP growth! Unfortunately, it was all based on two bubbles (tech and housing) which soon burst and resulted in a regression back to the mean over several years. As for the balanced budget which Clinton will always be credited with? He was dragged kicking and screaming to it by a combination of the net tax cut and an unusually thrifty Republican congress. Democrats know all this, but they’re hoping you don’t.

Again, the politics of this approach I'll leave to the experts, but the economics are pretty clear: Inept, Immoral, and Insane.

* Although the published rates are different, the tax code is thousands of pages long and the EFFECTIVE rates are what matters.  See link below:
http://www.taxpolicycenter.org/taxfacts/displayafact.cfm?Docid=161
Posted by @RolandRock1234 at 8:52 AM

Spending varies, but Current Taxes are virtually constant over time at 18% of GDP come hell or high water.

That leaves only two variables in the deficit equation: Spending and GDP. The only way to lower deficits is to grow GDP and cut spending. Period. Tax hikes will do nothing but cause turbulence. That much is axiomatic.
Posted by @RolandRock1234 at 8:59 AM 2 comments:

Perhaps you've seen this headline: "Fat Kids Should Be Taken From Their Parents - Harvard Expert Says!"

There's a tragic irony in this whole obesity "epidemic":  THE GOVERNMENT TOLD US TO EAT THE WRONG STUFF!


It turns out, by the time it hits the bloodstream, a bagel equals a can of Coke.  In other words, the government has been telling parents for years to feed their kids 6-11 servings of Coke a day!  (Plus the carbs in the other categories.)   And now experts want the government to punish the parents?  For what?  Following orders?

I think fat kids should file a class action suit.  Where is the new Dickie Scruggs?
Posted by @RolandRock1234 at 8:09 AM 1 comment:

A New Mission for NASA?

Today marks the final launch of a US Space Shuttle and that leaves NASA in search of a new mission.  Search no more!
Posted by @RolandRock1234 at 2:14 PM No comments: 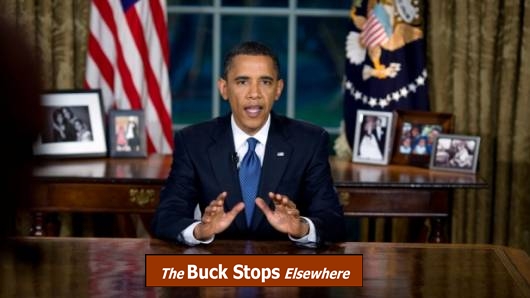