Why Are Markets Going Down? [UPDATED] 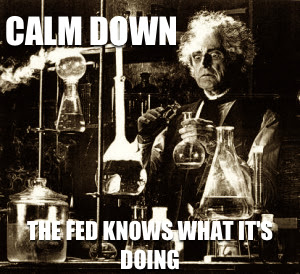 As usual, there're many things that are driving markets lower.  Among them are political uncertainty, China trade, an aging expansion, softening housing, troubles in Europe, etc.  But also as usual, there is an 800 pound gorilla in the room that is behind the momentum.  Today, like 2008, the gorilla in the room is the Fed.  The Fed has recently been raising interest rates to the point that last week one of the measures of the yield curve turned negative.  As any economist will tell you, nothing screams trouble like a negative yield curve.  It's the economic equivalent of your mate asking you to sleep on the couch; it may not be over, but it ain't lookin' good!

Two months ago Donald Trump tweeted that The Fed had "gone crazy", which was interesting since he had appointed Fed Chairman Jerome Powell himself just a short time ago. At the time, I defended Trump saying perhaps he was doing this because he understood economic history.  The worsening yield curve and market sell-off more or less prove his point.

One of the untold stories of the financial crisis in 2008 is how the Federal Reserve, under the very respected Ben Bernanke, collapsed the housing market by raising rates too high and too fast.  Ben Bernanke became Fed Chairman February 1, 2006 when the Fed target rate had already been raised by Alan Greenspan to 4.25%. The day Bernanke became Chairman he raised the Target Rate to 4.5%, but he didn’t stop there. He kept raising until July 1, 2006 when the Fed Funds Target hit 5.25%.  So, from July 1, 2004 to July 1, 2006 the Fed raised its Target Rate from 1.00% to 5.25%, an increase of 425% in two years.  Imagine if food or gas went up by 425%!  Shortly thereafter the yield curve was negative, and the rest is history.


And why does the Fed always do this when Republicans are in the White House?
Posted by @RolandRock1234 at 9:23 AM No comments: