Is Donald Trump the Golfing Gorilla? 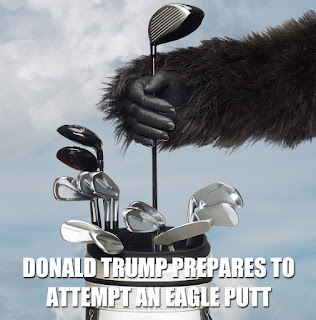 There's an old golf joke that goes something like this:

A guy trains a gorilla to hit a golf ball and then takes wagers claiming his gorilla can beat any golfer. Several golfers take the bet only to pull out and lose after seeing the gorilla hit the green with a 500 yard drive.  Finally, an astute pro takes the bet and stays in long enough to see the gorilla putt.  The gorilla steps up to the ball, lines up his putter, eyes his 18" putt, and WHAM...hits the ball another 500 yards!

This reminds me of Donald Trump's campaign.  He has been like the gorilla off the tee up to this point, outdriving the field of seventeen wanna-bees with his bold, brash, unapologetic, and downright nasty play.  But now he's on the green and putting for the win.  Does he have the wisdom and discipline to dial it back and act more like a seasoned pro than a Twitter addicted low-brow primate?

Donald Trump is comfortably in the lead in the delegate count at this point.  His 736 dwarfs Ted Cruz's 463.  So, what does he do?  He attacks Heidi Cruz for not being as young and hot as his wife, thus further alienating the female half of the electorate.  He continues with his Twitter rants against enemies real and imagined, thus alienating the remainder of the electorate.  And he stands by his campaign manager after he's charged with battery for grabbing a reporter, an act caught on tape, thus showing what a great and just manager he'd be as president!

Ummm...looks like he's stepping up to his putt with a driver.  Unfreaking believable...

(UPDATE: This was written BEFORE his insane abortion, nuclear weapons, and Supreme court comments!)

Forget What The Donald Says

Donald Trump talks some serious shit.  His mouth is like a perpetual motion BS fountain, spewing nonsense and ignorance into the atmosphere where it gets inhaled and sickens anyone who gets within range.  So, I guess that makes him exactly like just about every other politician... ever!?

OK, maybe Trump's BS has another gear beyond what most politicians have, but I chalk most of that up to the fact that this is his first foray into politics.  And this is the big stage.  Also, years ago I read his book, "Art of the Deal" and know that his technique involves a boat-load of hyperbole, which is just a civilized word for BS.

At some point a politician's words become meaningless and all we are left with is... his actions.  What has he done?  What were the results?  Did his BS produce the Shangri-La he promised?  This becomes all that matters when it comes to politicians.

With that in mind, and with Donald Trump looking all but inevitable as the GOP nominee, I offer the following comparison: 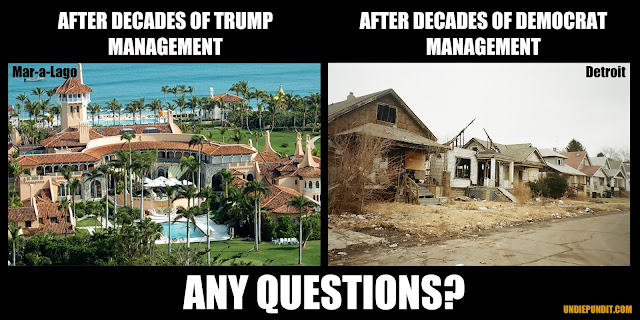 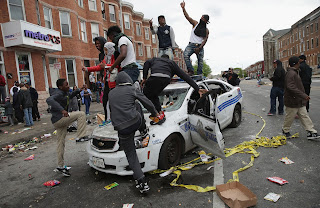 There’s lots of talk about coarse rhetoric inciting violence in this election.  Most of it directed at Donald Trump.  He’s been bluntly critical of those disrupting his rallies, he's offered to pay the legal fees of those who are charged after confronting disrupters, he praised a man who punched a disrupter, and he's said and done a number of insensitive things regarding his detractors.

Pretty bad stuff, I agree.  But if you are looking for a real villain inciting actual violence, which has resulted in actual death, destruction, and civil unrest, I contend you are looking in the wrong place.  The real inciter of violence is not at Mar-a-Lago; he’s in the White House.

By now everyone knows that “hands up, don’t shoot”, the narrative after Michael Brown’s shooting, was a lie.  What everyone seems to forget is that Trayvon Martin, and later Michael Brown, were the sparks for Black Lives Matter, which in turn began a war on police, which in turn spawned an unprecedented spike in the assasination style murders of police around the country along with widespread riots in numerous cities.

Do a Google search of “Obama speaks out against Black Lives Matter” or “Obama speaks out against hands up, don’t shoot”, or “Obama speaks out in support of the judicial system after Trayvon Martin.”  You’ll get crickets.  In fact, you’ll get the opposite.  Obama spoke out and offered tacit support to those calling for violence in all cases.  These movements have openly called for murder.  They have chanted things like, "What do we want? Dead cops. When do we want it?  Now!" and, “Pigs in a blanket, fry ‘em like bacon!”.  Actual deaths have resulted.  Actual riots have resulted.  Millions in property damage has resulted.  And Obama tacitly supported it all.

Moreover, Obama has used violent rhetoric throughout his political life.  In 2008 in Philadelphia he told supporters:  “If they bring a knife to the fight, we bring a gun, because from what I understand, folks in Philly like a good brawl.”  He was given a pass.  He has subtly, but obviously, given his detractors the middle finger.  Not figuratively, but literally.  His supporters laughed and applauded.  He turned the IRS into a Gestapo to harass his opponents.   His supporters looked the other way.

If you are of the opinion that Donald Trump cannot be forgiven for his failure to set a tone of reconciliation, that's your right.  I am not defending Trump here.  What I am doing is pointing out hypocrisy.  In other words, show me where you spoke out against Barack Obama's more serious transgressions, which resulted in actual violence and death, or I gotta call BS on your selective outrage.

(Update:  Trumps critics on both sides are accusing him of calling for riots if he is denied the nomination despite being the clear leader.  He did no such thing.  I myself have speculated the equivalent for either side if a clear leader were denied at either convention.  This is just common sense.  Trump was clear to say he would have no part in such nonsense, but this is ignored by his detractors.  Anyone who thinks millions of Sanders supporters, or Trump supporters, would quietly accept their votes being nullified is seriously delusional.)
Posted by @RolandRock1234 at 11:09 AM No comments: 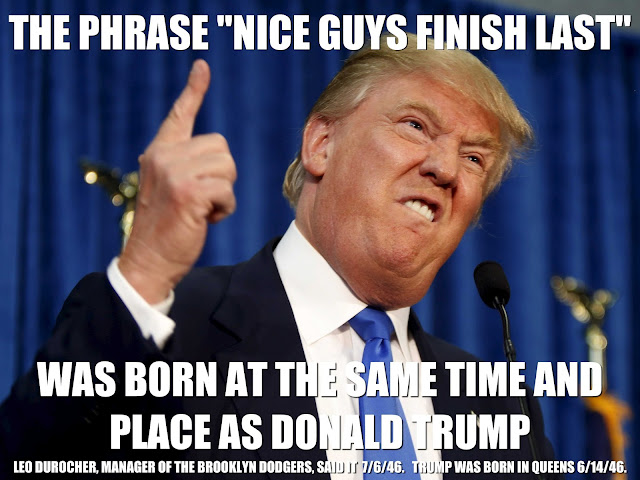 No doubt about it, Donald Trump is a different kind of politician.  Politics has always been a nasty business, but it is usually done quietly through delegation.  Politicians will publicly smile, speak in platitudes and niceties, and then privately turn their goons on their enemies.  They will weaponize the IRS, have your cat killed to send you a message, issue threats through third parties, or have surrogates break into your campaign office.  Never do they personally and publicly get mean.  Not Trump.  He has cut out the middleman.  He’ll publicly call you a bimbo, stupid, fat, loser, liar, weirdo, mock your disability, threaten to sue you, say everyone hates you, etc.  And his fans love it.  Why is this?  What has changed?

Most of us grew up with some form of the Golden Rule being drilled into our heads.  “Do unto others as you would have others do unto you.” In other words, be a decent person, and don’t be a jerk.  But there was also another maxim we grew up with, “Nice guys finish last.”  Obviously, we got conflicting advice.

It turns out that Donald J. Trump and “Nice guys finish last” were born at the same time and in the same place!  Both were born around the summer of 1946, and both in New York, NY. Interesting, no?

Leo Durocher was the manager of the Brooklyn Dodgers in 1946 when he said what eventually got boiled down to its sound-bite form as “Nice guys finish last.”  Donald Trump was born at the same time in the bordering borough of Queens and had that aphorism germinating in his brain his entire life.  Now we are reaping the fruits.

One bit of irony and hypocrisy in all this is that many of the people who are apoplectic over Trumpism have for twenty years supported the most beloved man in the Democrat party, Bill Clinton, who did things that make Donald Trump look like a boy scout.  So to those freaking-out over Trumpism who support Clintonism I say, “You might want to put some ice on that.”  ;-)
Posted by @RolandRock1234 at 10:34 AM No comments: