Why Conservatives Won’t Be The Ones Killing Reporters [UPDATED] 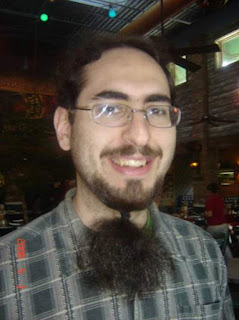 Yesterday was an amazing day in politics.  As we now know, a deranged gunman with a grudge (above) killed five people in a newsroom at a small newspaper in Maryland.  As if on cue, Liberals knew instantly who to blame.  In the several hours before anyone knew who the shooter was, Politicians, media personalities, and entertainers beclowned themselves by blaming Donald Trump and Milo Yiannopolous (as if he matters!).  “They have blood on their hands!”, they bellowed from their perches.  Among them several sitting Congresspeople.

While it is conceivable that a Trump supporter could commit an act like what occurred at The Capital Gazette, it was highly unlikely to have been a Conservative.  Remember, some Liberals also supported Donald Trump, which is how he got elected in the first place.  I, like everyone else, had no idea if the gunman was a Trump supporter (he was not), but I was nearly certain it couldn't have been a Conservative one. How did I know?


What are the odds of this being a coincidence?

And this is just the "P"s in the news today!  I could go on with almost every other letter of the alphabet.  Nothing approaching this happened during Obama's eight years when Conservatives peacefully opposed his policies by and large.

At the root of the Liberal/Conservative divide are four intertwined dichotomies:

First, at the base level, Liberals and Conservatives make decisions through different pathways. Liberals decide emotionally, and Conservatives decide rationally.  That’s not to say anyone makes decisions entirely one way or the other.  Most people are a blend of both with one mechanism dominating on average.  Think of the Yin Yang Taoist symbol where each side has a piece of the other.

The second part has to do with limiting principles.  A rational mind understands the concept of limiting principles and operates within those constraints.  An emotional mind knows no limits. Everything is on the table.  That’s why artists, musicians,  entertainers, and entrepreneurs tend to fit in the Liberal category.  These are the people you want to party with, and whose concerts you want tickets for.  But it’s also why violence is an option; if everything is on the table, nothing is not!

Third, is the difference between Liberals and Conservatives on the importance they place on the individual vs the collective.  Conservatives believe that individual rights are supreme over any group or collective.  Liberals believe the opposite, putting group and collective rights at the top. Leonard Nimoy's character, Spock, in the original "Star Trek" series said it most succinctly, "The needs of the many outweigh the needs of the few, or the one." Therefore, it becomes easy to see how an individual or several individuals can literally become sacrifices to aid a group or a larger collective. Millions have been killed under this Liberal assumption in Communist countries by the likes of Stalin, Mao, Pol Pot, etc.

Fourth has to do with an understanding of the nature of man.  Conservatives intuitively understand that any sustainable system must acknowledge the nature of man.  Liberals believe that they can control men, essentially denying their nature.  This cannot be done without totalitarian control, and that can only be had with force.  It goes that way throughout history when liberalism progresses to socialism and communism, as it always tries to do.

Donald Trump is indeed capable of being misinterpreted by one of his supporters who might someday commit an act of violence against a “fake news, enemy of the people" news-outlet, but it won’t be one of his Conservative supporters.


[SIDE NOTE ON RACIST VIOLENCE]
Racist violence is usually portrayed as coming from the "far right", the implication being that it is Conservative violence.  It is not.  For example, when the "Alt-Right" marched in Charlottesville and a  participant drove into protesters killing one woman, the media portrayed this as being the act of a Conservative Trump supporter.  Watch this Prager U video below to understand why this is not the case.  (Hint: the alternative to the Right is the...Left.  The Alt-Right has three core beliefs that are in direct opposition to what Conservatives believe, but are in full agreement with what Liberals believe.)

I went on a quest to find the “Great Inspector General Reports Throughout History” to save you the time and effort of doing the same.  Watch the short video below to see what I found...

Well the IG report just came out and it’s Deja Vu all over again!  It’s exactly like the James Comey news conference in the summer of 2016 when he said, "yes, Hillary broke all these laws, but she didn’t really INTEND to break all these laws, so there's nothing to prosecute."  (Try that for your next speeding ticket!)   The OIG report basically concludes with the same kind of pass - "yes, the department was caught making really biased decisions, and yes they were caught speaking in really biased ways, and yes they were caught taking really biased actions, buuuut, there’s no actual “documentary or testimonial” proof of any political bias. None at all. Not even a smidgen." Yada yada yada.  It's Comey, two point oh.

That said, this IG report may actually prove to be rather impactful, consequential, etc. in the same way Comey’s newser was.  You see, while the newser itself was a snoozer, the people saw through the charade. It angered them and they showed up to vote against the corrupt establishment, which is one of the reasons Trump kept confounding the pollsters.  That same phenomenon will likely result from this report and the follow-ups to come.

Posted by @RonaldReich5 at 7:49 AM No comments:

I recently heard Alan Dershowitz responding to critics who think he is selling-out his principles when he defends Donald Trump against the partisan agenda of the Mueller investigation: (paraphrasing) "I've always employed the "Shoe-On-The-Other-Foot" test, and in this I've been consistent regardless of who is in the White House."

That test comes to mind with today's SCOTUS ruling ostensibly in favor of a Colorado baker's right to deny baking a custom cake for an event against his religion.  Here's a meme I made at the time these cases were first making news: 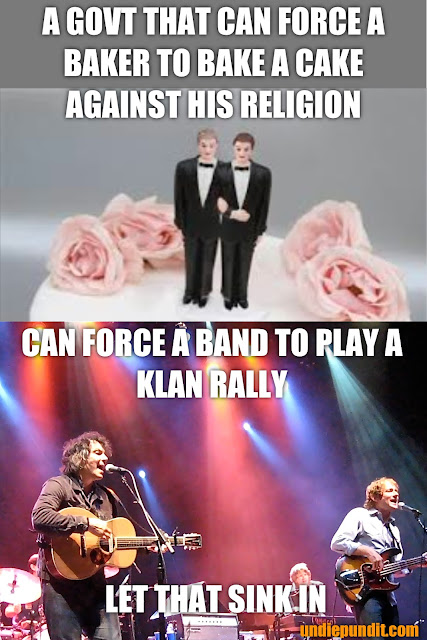 Good for the SCOTUS for applying the "Shoe-On-The-Other-Foot" test,  even though the ruling doesn't technically address the central issue here.

Posted by @RonaldReich5 at 8:20 AM No comments: