Battle lines have been drawn on the issue of Syrian refugees.  (Whether or not the refugees are actually from Syria is beside the point.)  The questions everyone is struggling with are these:

All good questions.  Before I answer them, please watch some Syrians sing about one of their favorite events:

I wrote the following in March of this year: 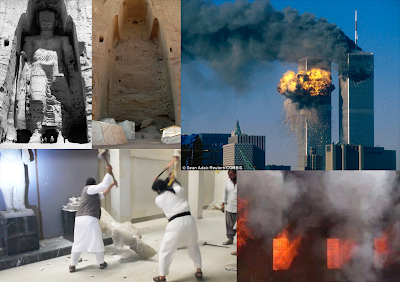 In March of 2001 Mullah Omar and the Taliban destroyed two 1700 year-old stone Buddahs in Afghanistan.  One of them stood 165 feet tall.  At the time few westerners understood that act.  Six months later when the twin towers of The World Trade Center were destroyed we all got an education in how kinetic Islam feels about infidel idols and symbols.

Fast forward to today and the exact same thing is happening in Iraq.  Islamic State, or ISIS, or ISIL, is summarily destroying ancient churches, statues, artwork, and symbols of the infidels.  This time we have some perspective on why this behavior is occurring – Islam, or at least a fundamental interpretation of Islam, leads its followers to destroy these symbols.  It turns out the Quran, like the Old and New Testaments, contains a fair amount of idol destruction.  The difference is Christians and Jews do not go about re-enacting these verses from the early days of monotheism.  Muslims do, particularly the kinetic radical fundamental type.

What scares me is the timing of all this.  Six months after the Buddahs came down we got 9/11.  I hope kinetic Islam has a different schedule this time.

Anatomy of a Myth - Democrats are Better for the Economy!

The Wall Street Journal published a letter Nov, 3rd from two Princeton Professors, Alan Blinder and Mark Watson, defending Hillary Clinton for saying, "The economy does better when you have a Democrat in the White House!"  They have written a well publicized research paper proving her assertion.  Alan Blinder is a Clinton advisor.

Robert Reich, (no relation), is another one who has written extensively about the miraculous economies of Democrats, particularly in the years after WWII.   Robert Reich served in the Bill Clinton administration.

The New York Times ran a related piece in 2008,  right before the election,  about how the stock market does much better under Democrats than under Republicans.  The New York Times is a long time supporter of both Clintons. (I refuted the NYT piece thoroughly at the time here.  I highly recommend reading it.)

We can expect much more of this as the 2016 election approaches.  Having studied these claims for years, I find this is all carefully calculated political sophistry, but very weak economics, and void of logic.

It is true that Democrat presidents have a better record of growing GDP.  After all, Democrats are the party of growing government, and GDP includes government spending.  Ergo, when government grows, GDP grows.  Barack Obama borrowed and printed fourteen trillion dollars, all of which added to GDP, but must be paid back at some future time.   GDP doesn't account for that. It is a one sided account entry.  If you take away the fourteen trillion in debt and QE under Obama, growth is about ten trillion...negative, since he took office.  But that's not how GDP growth is reported. It should be if we want the whole story.

Another factor is that Republican presidents have had two hands tied behind their backs when it comes to economic policy: power and interest rates.  No Republican president since 1947 has ever had full robust control of both houses of the legislature.  Democrats, on the other hand, had either filibuster power (40 votes) or complete control (60 votes) of the Senate every second since 1947. Democrats had complete control of the executive and legislative branches for 20 years since 1947. Republicans had all of 4 years.  Moreover, Republican presidents have had an interest rate headwind averaging about 38% higher rates since the Fed began setting rates.  Albeit, most of that discrepancy comes from the historically low rates from the Obama years.

Additionally, presidential party affiliation has almost no correlation with economic policies over time.  JFK, a Democrat, was a tax cutting supply-sider like Reagan, and nothing like Hillary Clinton or Barack Obama.  Richard Nixon, a Republican, instituted wage and price controls, something Ronald Reagan would never have done.  Bill Clinton ended up as a free trader and a capital gains tax cutter.  The list goes on.

Finally, economic policies do not reveal themselves instantly.  Medicare, Medicaid, and Social Security were passed by Democrats long ago, but only now threaten to explode in our faces.  George W. Bush was saddled with the 2008 sub-prime disaster, yet Bill Clinton and the Democrats set that disaster in motion in the 1990’s when they thought it was a good idea to offer mortgages to unqualified people.  Sub-prime boosted the economy smartly until it blew-up over a decade later. Barack Obama likes to claim victimhood for inheriting the sub-prime mess, yet he was a key supporter all the way back to his community organizer days.  He continued that support while in the Illinois state senate,  into the U.S. Senate in 2008, and continuing even to this very day as president.

Alan Blinder asserted in his letter that the economy is healthier today than it was in 2009.  I calculated that if we had just given every family in the US the money added to the debt since 2009, plus the Fed’s Quantitative Easing under Obama, each household could have been gifted $120,000.  My Labradoodle could have improved the economy if you gave him $14 trillion to re-distribute!

Robert Reich waxes nostalgic for the halcyon days after WWII when tax rates and unionization were high and the economy grew like topsy.  He is making a classic "post hoc" fallacy mistake.  ("post hoc, ergo propter hoc" is latin for the logical fallacy, "after this, therefore because if this.") Correlation is not causation.  Yes, the post war economy was very strong for decades, but that strength had nothing to do with high taxes and unionization.   In fact it was in spite of that.  WWII left us the only intact industrialized country in the world.  Japan, Europe, and the USSR were smoldering ruins.  China was still in loincloths.  South Korea was on the verge of its own war.   Of course we grew!  We could do no wrong with that tailwind.

Despite being convinced that Democrats are not superior stewards of the economy, I cannot make the claim that Republicans are.  There's just too much noise in an economy.  Too many moving parts. And party affiliation is too weak an indicator of historical economic philosophy.

(For my definition of Demand Side Economics see this.  And this.)
Posted by @RolandRock1234 at 11:50 AM No comments: