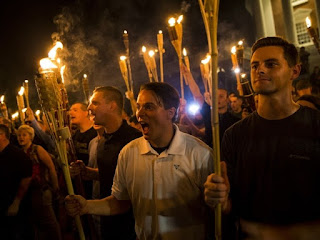 Charlottesville was amazing and frightening on many levels.  To the naked eye it looked like one thing, but put it under a microscope and it looks like an entirely different and possibly more sinister thing.

To the naked eye some Nazi, KKK, and white nationalist loonies protested with torches and sticks, shouted racist slogans and ended-up murdering a woman who was there counter-protesting.  Of course, this was all Donald Trump's fault.

That is the narrative the media ran with and the one most Americans believe.

Don't take my word for it.  Here are Democrat operatives explaining these very tactics to James O'Keefe's hidden camera.  If you have the time to watch the whole sixteen minute video, I've embedded it below.  If not, here are some links that begin at the appropriate segments:


Does this mean that everyone there was a trained agitator?  Not at all.  There were real Nazi, KKK, and white nationalists in Charlottesville.  These morons are always marching somewhere.  In fact they marched throughout the Obama Presidency and even caused violence.  But the media never made a big deal out of it because they are a tiny fringe group and always will be. The only thing that has changed is now they are being employed as willing dupes and useful idiots in choreographed Democrat "conflict engagements" to hurt Trump.

The same thing can be said for the real anarchists and Communists who showed-up in Charlottesville.

Some other things come into focus when further looking at Charlottesville under a microscope:

A few days after Charlottesville, a pro-Trump free speech rally in Boston was labeled a "Nazi rally" by the Democrat Mayor of that city.  Democrats showed up en masse, some violently, to kill... free speech.  They were lauded by the media and the left and succeeded in shutting down free-speech. Featured speakers at the free speech rally included Jews, Indians, Blacks, and Whites.  That's a strange group of Nazis.  Here's what really happened in Boston: [VIDEO]

So how could these choreographed operations happen right under the media's nose without them even bothering to look under the microscope?  As revealed in the third clip above, these operations are disguised to never be traceable back to Democrat operatives.  Add to that the fact that the media has no interest in exonerating Donald Trump.  In fact they are complicit.  That's why they disingenuously reported that Donald Trump praised the racist protesters in Charlottesville as "good people".  What he actually said, and he repeated it several times, was that some of the protesters were just protesting tearing down a statue, and among that contingent, some were good people.

Remember, the whole protest in Charlottesville was about protecting a statue of a guy who was a U.S. war hero, a top U.S. General, a graduate of West Point, and a powerful voice for reconciliation after the Civil War. .  In addition to that he was also a traitor and fought for the Confederacy, which is why the statue was slated for removal.

Fair enough.  If this was about just one statue, or two, or all Confederate statues, it wouldn't mean too much. But this movement has metastasized overnight into a full blown Cultural Revolution. Every statue, structure, institution, city, state, county, etc. named for a anyone who offends anyone must now be expunged.  The left wants to erase our history.

Mao Zedong, the Nazis, the Taliban, and ISIS did the exact same thing.  Mao wanted to erase all remnants of pre-communist China because history was a threat to communism.  Nazis burned books and worse for similar reasons.  The Taliban, ISIS, and all of kinetic Islam routinely destroy all remnants of non-Muslim things like statues, art, churches, ...and infidels.

The Cultural Revolution resulted in millions of deaths, set China back decades, and was a colossal failure on every level.  The Nazis and kinetic Islam had the exact same results.  What are the odds this will work for us now?
Watch the full video here.  YouTube/Blogger/Google makes embedding this video impossible.
https://youtu.be/5IuJGHuIkzY

I'm not usually one to root for the Communist, but that's what I found myself doing the other day. As a student of economic history, I consider communism, and in fact all degrees of Marxism (which is always "progressive") antithetical to sustainable human well being.  Economic history bears this out. But there are some circumstances which make it excusable.

To wit, the other day I read a Wall Street Journal book review of "Ants Among Elephants", by Sujatha Gidla. an account of life as an "Untouchable" in India.  The reviewer cited two narratives running through the book, the hardships of Ms. Gidla's Untouchable family, and their political views as communists.

Well hell, if I was born an Untouchable in India, I'd be first in line at the communist buffet!  India's caste system, despite efforts to end it, is still the mother of all mobility killers.  If your grandparents swept the floor, so did your parents, and so will you in all likelihood.  And it goes back countless generations.  Marxism is the only option when the culture won't abide.

I've never bought into the notion that income gaps breed Marxists.  That's not enough.  To me it's always been about economic mobility.  Think of any Marxist movement in history and you'll find, A) downtrodden people with, B) no hope of upward mobility.   The lack of hope is key.  We've had downtrodden socialists and communists in the U.S. since the late 1800s, but they never got much traction because we've always been the land of mobility.

All of which got me wondering:   Why in the U.S,  the world heavyweight champion of economic mobility, is Marxism ascendant today?

One popular theory is that in the information age, only tech geniuses and the hyper-educated can advance.  This leaves the less-educated feeling trapped.  Others say it's low skilled immigrants and an inner city underclass who see no way out.  All that sounds good, except most of the Marxists I know have graduate degrees!

Here's another theory:  In 1900, total government spending (federal, state,  and local) was around 7% of national income.  Today it's around 60%. *  As government and redistribution have grown, mobility has shrunk.

This is the tragedy of Barack Obama, Bernie Sanders, and the modern Democrat party;  they see inequality and think bigger government and more redistribution are the solutions.   It's a cheap emotional appeal that voters increasingly fall for,  but it always makes things worse in the long run.

What they miss is that we are not India. We have a long history of mobility that we've only recently lost.  For example, blacks moved into the middle class at a faster rate in the 1950s than they do now!  Astonishing when you consider the headwinds pre civil rights.

Perhaps in the back of voters minds, when they heard "Make America Great Again", they were thinking of our lost mobility.

The American Republic will endure until the day Congress discovers that it can bribe the public with the public's money.  - Alexis de Tocqueville, 1850s 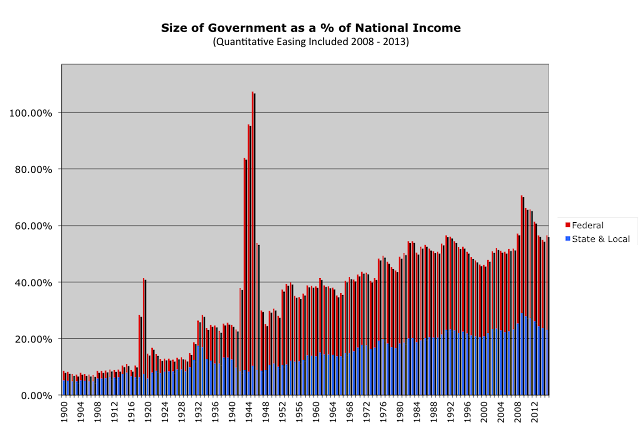