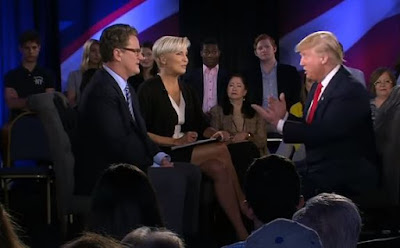 I’ve never been a fan of Donald Trump’s demeanor (accent on the “mean”).  All the derogatory nicknames, vindictive tweets, and constant dubious accusations turn me off along with many in his own party who should be his allies.  The latest episode regarding Morning Joe Scarborough and Mika Br … we’ll settle for Mika… has brought this issue once again to the fore.

Though these tactics turn me off, I can at least explain them.  Am I a mind reader?  Do I have some special insight into Donald Trump’s inner psyche?  No, all I’ve done is read his books.  He explains exactly why he does this.  In addition, I’ve watched as several Republicans were chewed-up and spit-out by the Left’s tactics.  Apparently, so has Donald Trump.  I’ve also connected a few dots that others may have not.

“The Art of the Deal”, published 30 years ago, explains many of the quirks that made Donald Trump the most unlikely President in U.S. history.  It also helps explain the Morning Joe tweets.

"In most cases I'm very easy to get along with. I'm very good to people who are good to me. But when people treat me badly or unfairly or try to take advantage of me, my general attitude, all my life, has been to fight back very  hard."
Donald Trump, “Art of the Deal”, 1987
Donald Trump had a long and congenial relationship with Joe and Mika up until his recent tweet.  Or so it seemed.  The turning point was not Trump’s tweet, but rather Joe and Mika’s recent attacks on him.  He’s crazy, a dictator, and ruining the country are just some of the things now routinely said on Joe and Mika’s MSNBC show.  Given the above quote, is it any surprise he’s fighting back?

Ok, let’s stipulate that it’s just Trump’s nature to fight back hard.  Why go all the way to being outrageous like he did?   Why call them “psycho”, “low IQ”, accuse Mika of having a face-lift, and imply they were kissing-up to him at Mar-a-Lago?  Doesn’t Trump realize that by going over the line he is doing more damage to himself than to the object of his attack?

"One thing I've learned about the press is that they're always hungry for a good story, and the more sensational the better...The point is that if you are a little different, a little outrageous, or if you do things that are bold or controversial, the press is going to write about you."
Donald Trump, “Art of the Deal”, 1987

Nothing has confounded his critics more than Donald Trump’s unconventional tactic of courting controversy.  He built his business brand, and now his political brand, on his belief that all media is good media when one is on offense.  He goes out of his way to be outrageous, different, bold, and controversial.  He relishes the media attention and he seems not to care that most of it is negative.

The experts said that tactic may work in Manhattan real estate, but it would never work in national politics.  (While not an expert, I was among them.)  Now he’s President and the experts have been embarrassed.  What do they do? Read his books and try to understand him?  No. They are at it again claiming Trump is not acting “presidential.”

What is “presidential”?  Is it the passive aggressive behavior of a President who hides his intentions, speaks in glossy platitudes, and weaponizes the IRS to attack his opponents, or is it the active aggressive behavior of a President who tells you exactly who he is, what he is, speaks bluntly, and openly attacks his critics on twitter?  It’s at least a question worth putting to a vote, as it was in November.

Donald Trump was born in Queens, NY, during the summer of 1946.  Also born that same summer, a dinger from where Trump was born, was the saying “nice guys finish last”.  Leo Durocher, the manager of the Brooklyn Dodgers, was conversing with a journalist when the kernel for that immortal phrase came out.

Donald Trump had that aphorism marinating in his brain his whole life.  It has come to signify the essence of the Trumpian way - winning at any cost.

OK, now let’s stipulate that Trump is a person who fights back, believes controversy courts media, believes any media is good media, and can be rather mean.  Why continue this tactic now that he’s President?  He won.  He’s got nothing to prove, right?  Why not dial it back and act presidential? All he should be concerned with is winning support for his agenda!

"Our weak response in defense of the president and in setting the record straight, is, I believe, one of the biggest mistakes of the Bush years."
Karl Rove, 2010

I think Donald Trump does not want to repeat this mistake.  He knows he is going to be attacked relentlessly no matter what he does because the people in media, academia, and entertainment, in other words the people who have the biggest megaphones, are almost uniformly Leftists.  So the choice is to absorb the blows, like George W Bush, or fight back the only way he knows.

George W Bush is by all accounts a gentleman.  He is a patrician, attended Yale and Harvard, a former Governor, and the son of a President.  He wore a tie and jacket every moment he was in the Oval Office. When he was attacked non-stop as a war criminal, liar, Hitler, buffoon, illegitimate President, and the man who collapsed the global economy, did he offer a defense?  Did he fight back?  Did he go on offense?  No.  He thought fighting back was beneath the dignity of the office.  He turned the other cheek out of a misplaced sense of honor.  In other words, he put his honor above the honor of those who voted for him.

George W Bush left office with a 30% approval rating, the GOP lost the entire congress, the Democrats were able to unilaterally socialize control of medicine, and the socialist age of Bernie Sanders was begun.  To this day Bush is unfairly blamed for 9/11,the 2008 financial collapse, the collapse of Iraq, the mess in Afghanistan, ISIS, and herpes.  But at least he has his dignity, right?

George H W Bush, Bob Dole, John McCain, and Mitt Romney all offered weak defenses against the Left’s attacks.  None went on offense.  All lost elections.  The last GOP presidential candidate to fight back hard was Ronald Reagan, who did it with class and humor.  He also lost elections before he won them.  Donald Trump has never lost an election.

Ok, now let’s stipulate all the above.  Why do this on Twitter?

“My fellow Americans…”
Ronald Reagan, whenever he wanted to get his message across

Ronald Reagan understood, like no other President before him, that he would never get his message out if he relied on a hostile media.  He had to go directly to the people and he did so on TV, radio, and in print.  Reagan became known as “the great communicator”.

Donald Trump won the Presidency because of his stream of conscience communication style.  In his own unpolished and unconventional way he is also a great communicator.  Trump’s Twitter account is just his favorite way of doing the day to day communicating.  It’s instantaneous and effective.  And it drives his opposition bonkers.

The bottom line is; Donald Trump understands more about all this than he’s ever given credit for.  He codified his philosophy 30 years ago so none of this should surprise anyone paying attention.  He just is who he is.  It’s that simple.  It doesn’t make it right, but at least it can be understood.

7 Reasons Donald Trump (and all Republicans) Are In Imminent Danger 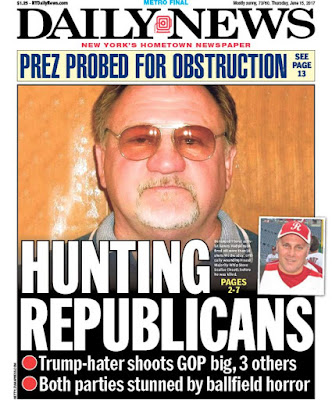 1.  Almost all presidents have at least one serious attempt on their lives.  It's just a part of the job. That said, Donald Trump is in demonstrably more danger than any other president in recent history.

Lincoln was considered evil and hated by Democrats because he was a threat to slavery.  Slavery had become an entrenched entitlement for southern Democrats.  It was legal, it went back generations, and it was very lucrative.  Lincoln was trying to kill the Democrat's golden goose.

Trump is a similar threat to entrenched Democrat entitlements.  Among them: Socialized Medicine, open borders, control of the vast bureaucracies, union power, illegals able to vote, etc. These are today's Democrat golden geese.

4.  Four Presidents have been killed in office, three Republicans and one Democrat.  The odds of being killed in office are 3 times greater for a Republican, and the odds of taking a bullet are 1.6 times greater.  Of the 8 shot, 5 were Republicans and 3 were Democrats.   All presidents who were killed in office were done so from the Left (and that's not a reference to the direction of the bullets).
Of course, all were probably deranged,  but it is noteworthy that no president has ever been killed by a conservative, or even by someone to the right of them.

5.  Ronald Reagan was the last Republican president to be shot.  In many ways Trump and Reagan, (along with others, most notably Lincoln) share at least one interesting trait: they were seen as ideologues.  By that I mean they had specific issues they were committed to and were willing to unapologetically fight for.  In Reagan's case it was broadly getting government off the back of the people, lowering taxes, deregulation, standing up to foes.  Trump, though a Democrat for most of his life, seems particularly ideological when it comes to similar things:  enforcing borders, reducing the "administrative state", restoring the rule of law, fighting jihad, etc.

Like Trump, Reagan was hated by Democrats, painted as evil, dumb, dangerous, crazy, etc.   Reagan was shot in March of his first term.


6.  The Russian collusion meme is part of the whole attempt to label Trump evil.  It was Ronald Reagan who labeled Russia (USSR at the time) the "evil empire".  Democrats always scoffed at that characterization.  Remember the famous debate exchange between Barack Obama and Mitt Romney, where Romney singled out Russia as our "top geopolitical foe"?  Obama snarked, "The 1980s called and they want their foreign policy back".  Now the tune has changed because Democrats figured out they could augment their characterization of Trump as evil by tying him to the "evil empire".   By doing so they have been able to peel off some of his weaker, hawkish, GOP support like McCain, Graham, et al.


7.  The government, regardless of who's in power, t is largely a Democrat institution.  That includes the Secret Service, FBI, career DOJ, etc.  These unionized, mostly Democrat, government entities are responsible for the President's safety.  Though they are usually considered to be above politics, will they perform as they should if they become convinced the man they are protecting is evil?  Will they take a bullet for a man they are told daily is Hitler?