Socialism is the Darwin Award for Economic Ignorance 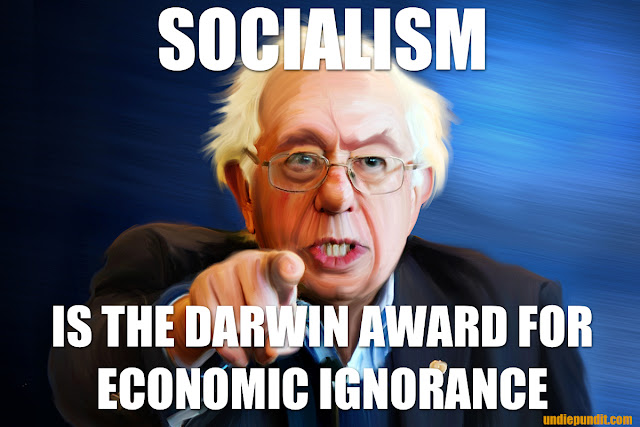 Pop quiz:
Odds are you will be able to answer the first question correctly and can name Karl Marx as the father of modern socialism/communism.  You probably can do a decent job of explaining Marxism without even looking it up on Wikipedia.  You may even be familiar with the Marxist slogan, "From each according to his ability, to each according to his need."

Conversely, if you are asked who the father of modern capitalism is, odds are you'd either draw a blank, or be mostly wrong.

If you attended a public school in the U.S., chances are most of your teachers were union members. Unions were prohibited for most government workers prior to the 1960s because organized labor in the U.S. began as a communist/socialist movement.  Public sector unions were seen as a huge conflict of interest. But that changed in the 1960's under Democrat John F. Kennedy, and since then government workers, including school teachers, have flooded into organized labor. That's not to say all teachers and organized laborers are socialists.  Most probably don't even think in those terms, but the politics of organized labor leans undeniably in that direction. You may or may not have been taught Marxism in school, but you probably weren't taught anything positive about "capitalism"!

If you attended a college in the U.S., particularly in recent years, you are very likely to have been taught Marxism.  Karl Marx's "Communist Manifesto" is the third most assigned book at U.S. colleges today.  That's out of all the books ever published!  The next most assigned book in economics, capitalist or otherwise, is not even close.


Many scholars credit a Scotsman named Adam Smith as the person whose ideas most influenced our economic system.  Adam Smith’s book, “An Inquiry into the Nature and Causes of the Wealth of Nations” was actually published in 1776.  (That date rings a bell, no?)  But the word capitalism wasn't in common use in Adam Smith’s day.  He never used it.  We mistakenly call our economic system capitalism because that's what Marx and the critics called it.  The name unfortunately stuck.

If everyone knows what "Marxism" is, why doesn't everyone know what "Smithism" is?  Because it’s not taught, except to select economics majors.  According to the Open Syllabus Project, Adam Smith is assigned at a rate about 25% compared to Karl Marx.  "Smithism" never became a word the way "Marxism" did.  You can go through K-12 and well beyond in schools in the U.S. and never hear the name Adam Smith, never learn about his ideas, and never understand the influence those ideas had on the founding and success of our country.

Pop quiz:
You are probably familiar with the first term, but can you accurately define it?  Have you ever heard of its opposite, Demand Side Economics?

These are opposite approaches for achieving different economic goals.  Supply Side seeks to optimize overall economic vitality (Smithism).  Demand Side seeks to stimulate consumption (Keynesianism), or at times to redistribute wealth (Marxism).

If you look up supply side economics on Wikipedia, you’ll find a thorough entry along with plenty of criticisms.  If you look up demand side economics, you’ll get... crickets.  The language in this case does not favor the Marxist/socialist demand side ideology.   Hence, it is not even defined.  [UPDATE:  There is now a short and inaccurate entry on Wikipedia for Demand Side Economics.  When the first version of this piece was written in 2016, there was only a re-direct to "Keynesianism".]

The financial crisis of 2008 was caused by:


Most likely, you are 100% certain the correct answer is A.

No event had a more profound impact on this country's recent tilt towards socialism than the financial crisis of 2008.  It is said that history is written by the victors.  That has never been more true than in the wake of the financial crisis.  Democrats controlled the government commission that wrote the post-mortem.  Barack Obama won the presidency.  Democrats had both houses of congress.  And liberals made the movies and wrote the books explaining the crisis to the masses. Unfortunately, everything they told you was a deliberate deception designed to exonerate socialism, and scapegoat capitalism.

It all began with the affordable housing goals promoted by Democrats in the early 1990s, which lowered mortgage requirements.  It accelerated in the mid 1990s under Democrat Bill Clinton with further loosening of mortgage standards, pressure on banks to write loose loans, and mandates for government backed companies FNMA (Fannie Mae) and FHLMC (Freddie Mac) to buy all the new mortgages.  It finally reached its apex in 2007 under Republican George W. Bush, while Democrats including Senator Barack Obama, ran both houses of congress.

All of the risk from this socialist redistribution was supposed to be assumed by the federal government, mostly in the form of the afore mentioned government backed companies.  Fannie and Freddie were ground zero for the financial crisis.  No government official took more money from these two companies, and at a faster rate, than the junior Senator from Illinois named Barack Obama.  His closest competitors in that money grab included Barney Frank, Chris Dodd, and Hillary Clinton.  If this is news to you,  it's because they wrote the history.

What they told you was that it was a perfect storm involving greedy bankers, deregulation, and the natural flaws of capitalism.  It was a plausible argument designed to deceive.  Bankers today are no greedier than their banking forebears.  So why did they suddenly engage in such risky lending? Because they were coerced to do so.

Deregulation also had nothing to do with it.  Canadian banks are lightly regulated compared to their U.S. counterparts and none of them failed.  Why the difference?  Only in the U.S. was mortgage credit redistributed.  To make matters worse, government regulations encouraged financial institutions to load up on mortgage backed securities.   Unfortunately, when the scheme went bad the damage quickly spread to the private financial sector bringing the entire global financial system to its knees.


The deceptions about this animated the Occupy Wall Street movement, got Barack Obama elected twice, and are responsible for the acceptance of openly socialist candidates like Bernie Sanders and Ocasio-Cortez today.   They are also part of the continuing campaign that has mischaracterized the mortgage market as an example of free-market failure.

The frightening thing about this is, if history is written by the victors and they engage in deception, aren't we doomed to repeat it?  Fannie and Freddie own just about every new mortgage written since 2008, and the socialist policies promoting home ownership and borrowing accelerated under Barack Obama.  We are currently in the process of building a second real estate bubble.  Adding to that are new socialist bubbles in national debt, student loans, auto loans, and equity prices.

A) Scandinavian countries are happy, healthy, productive, prosperous, AND socialist
B) They misunderstand Scandinavian economics and history

Scandinavian success came long before their experiment with socialism.  They were happy, healthy, productive, and prosperous prior to the 1960s when they first began their turn towards socialism. Socialism had nothing to do with their success.  But sixty years of high taxes and socialism has slowed their growth and momentum.  Until recently, Sweden and Denmark spent more than 100% of their private sectors on government - an obviously unsustainable level.  In response, socialist Europe has been freeing their economies and sharply turning away from socialism.  Switzerland, Ireland, and the U.K. are economically freer than the U.S., and Sweden, yes "socialist" Sweden, is essentially tied with the U.S. in economic freedom today.  (According to the Heritage Foundation rankings.)

Here's the thing:  National socialism has never produced anything long term other than misery, poverty, totalitarianism, and death.  Think Soviet Union, Cuba, Venezuela, and North Korea.  The NAZIS, who brought about the holocaust, WWII, and directly or indirectly caused the death of 70 million people, were known by the German acronym for "National Socialists".

So, that's at the national level.  And long term.  At the local level, socialism can survive a bit longer. Local socialism does not eliminate the incentive killing aspects of socialism, but it does avoid the inevitable monetary collapse.  That's because local governments cannot create money and therefore tend to be more fiscally responsible. National governments can hide their insolvency, plunder future generations, devalue currencies, manipulate interest rates, and cause much bigger problems down the road.

This is an important point that deserves repeating;  socialism cannot work long term at the national level.  The national level is where money is created and controlled.  Our system was never designed to be a socialist system.  The Constitution implied that the states were the proper place for redistributive experimentation.  The conflict of interest at the national level is just too great.  National politicians will eventually destroy the currency, borrow too heavily, undermine the work ethic, and undermine national defense in an attempt to gain and maintain power. The founders knew that.  It is happening today.  We doubled our national debt during just Obama's eight years.  Interest rates were artificially held near zero for that entire time.  If and when rates normalize to historical levels, the debt service alone will cause the kind of pain socialist nations have felt throughout history. We are not immune.
In summary: You were indoctrinated to be a socialist. You were indoctrinated to call our system capitalism.  You've been deceived about the benefits of socialism.  You've been deceived about the evils of free markets.  And you've been deceived about the perils of national socialism.  If you still think socialism is great after all that, congratulations, you've earned a Darwin Award in Economics!
Posted by @RonaldReich5 at 10:35 AM No comments:

Newt Gingrich has been all over the news this election cycle opining on this or that, and acting as a sort-of GOP elder statesman.  What very few people know though is that Newt Gingrich has a secret love child, the actor/comedian Jack Black!  Here now the shocking proof ICYMI: 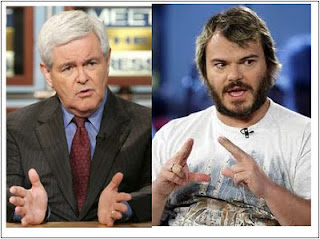 "She just has one of those asses you gotta grab!” 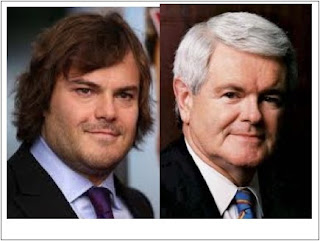 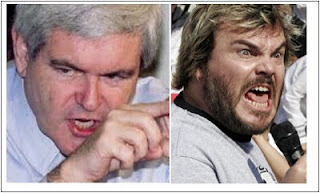 “Why can’t you f*%#ing idiots understand this?" 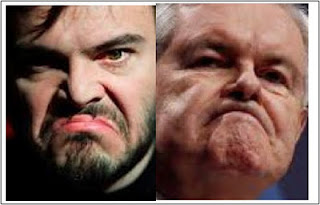 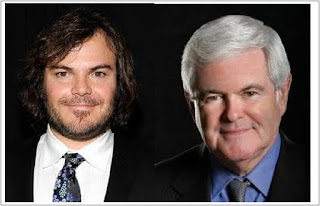 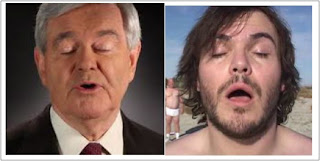 Me and Dad when we used to drop acid together.

Posted by @RonaldReich5 at 8:14 AM No comments: