Posted by @RonaldReich5 at 7:01 PM No comments: 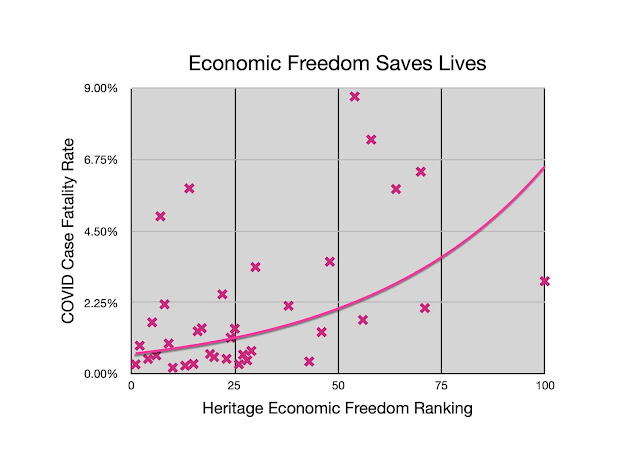 It's way too early to close the book on this, but there's already a strong correlation between economic freedom and COVID death rates.  Free markets save lives, and an unfree market (ie: socialism) kills.

To make this graph, I took the top 100 countries in the Heritage Foundation Index of Economic Freedom and calculated the Case Fatality Rate (CFR) as of 3/26/20 based on raw data from Worldometers.

I only included countries that had both significant COVID cases and could also be considered reasonably reliable data sources.  (China is not in the top 100, and I don't trust their numbers anyway.)

I'll update this periodically, and we'll see if it holds.  Below is the raw data.

(Note: The two outliers in the first quadrant are UK and Netherlands, which both have socialized medicine yet relatively free economies.  Again, it's very early in the progression of this pandemic, and there's a lot of data uncertainty.)

The Coronavirus Economic Crisis - How to Fix It? 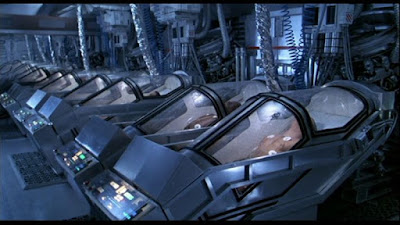 I believe we are doing this all wrong.  Not the medical part.  I think the world is getting that right as evidenced by the success of gene mapping, vaccines, hydroxychloroquine/zinc, anti-bodies, anti-virals, etc.  The medical crisis might be a supply chain problem at this point.  Still deadly serious, but there's a light at the end of the tunnel.  However, the economic crisis is an unfolding disaster.

The current approach is like the Dutch boy with his fingers in the dyke.  Except he's trying to plug a million holes with his fingers.  It's simply not possible and doomed to fail.

The government is talking about trying to bail out every individual industry involved, well, at least the big ones with lots of lobbyists.  Airlines, cruise ships (yeah, there's an essential industry) automobiles, chain restaurants, banks, planes, hotels, etc., will all get generous bailouts in the trillions.  And these industries were the ones who for years have been blowing their money on stock buybacks to enrich their execs.  Why should they get a blank check worth trillions?  They shouldn't.

Nor should they be asked to twist in the wind thanks to a pandemic.

Meanwhile, massage therapists, wait staff, carpenters, bartenders, yoga instructors, musicians, small businesses, restaurants, bars, and people like YOU are completely out of work and on their own.

There's another way which would save everyone, and avoid the disaster we are creating.

Believe it or not, this is NOT a MONEY problem.  It's a TIME problem.

Going back to the dyke analogy, what if there was a way to freeze the ocean?

The idea is similar to the sci -fi concept of suspended animation.  To do that we need to both support life AND suspend time.

1. Suspend all time related expenses: debt, taxes, rents, leases, insurance, etc. until this is over.  We simply go into timeout for the shutdown weeks or months and add that time to the end with interest. This would freeze bank loans, the entire bond market, municipal market, mortgages, rents auto leases, loans, insurance, and all taxes, etc.  Nobody would be obliged to pay anything, and nobody would be able to demand anything regarding these obligations.  Bankruptcies, evictions, lawsuits, etc would all be in suspended animation until normalcy returns.

No company would need a giant bailout under this scenario because no company would have these time related expenses during a time of no revenue.  Any company that could continue operations would do so and would continue paying their debts, taxes, rents, and leases. Those that cannot though, would not go bankrupt simply because of a pandemic.  The federal government would still be there to lend to states and local governments who need it.

2. To deal with the need to sustain life, everyone who needs money in the U.S. would go on the existing food stamp program (SNAP), which would be increased to encompass other essential expenses like energy, gas, and medications.

SNAP is an existing program. It wouldn't require much modification to scale up for the entire population.  (Alternatively, checks could be sent to everyone, but what could possibly go wrong with that?)

The timeout bill would be much shorter than the bailout monstrosity and way cheaper.  The only money spent would be for citizens to sustain life and governments as loans.  No money would need to go to businesses and corporations.

Let's freeze this ocean of economic woe until this nightmare clears up.  When it's over, we can thaw the economy and bring it back to life.

[Update: Unfortunately, the government will never do this.  Why?  First, freezing the economy would be a huge statistical hit to GDP and the unemployment numbers.  Pumping trillions into a bailout will flow directly to GDP and paying employees who can't work will moderate unemployment numbers. Politicians can't allow the bad optics of crashing GDP and rising employment numbers.  That would spook the markets, God forbid.  Second, Democrats see this as an opportunity to blackmail Trump to sign their agenda.  Both sides want a 2000 page bill that no one will ever read except the lobbyists who write it.  That's why we will spend trillions of dollars we don't have and flood the market with the monetary equivalent of Fentanyl.  Sad!]

The government says you don't need a mask unless you're sick.  Translation: YOU NEED A MASK, and everyone you know and love needs one too!   Why?  Because there is significant asymptomatic spread and minimal compliance by the symptomatic.

Here's how you can make many very good masks for about $1 plus labor.

See graph below.  What more do you need to know? 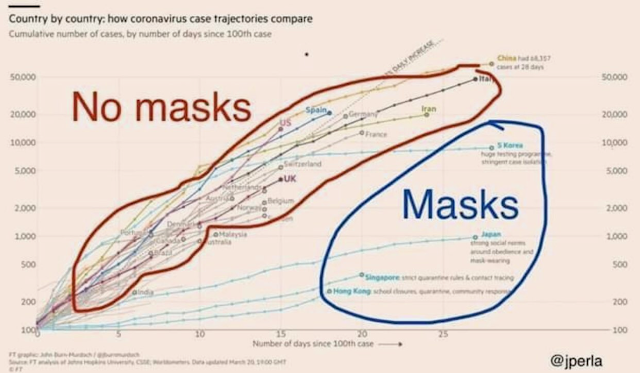 When this is all over, the no-mask policy promoted by the U.S. CDC will be rightly seen as deadly and criminal.   Heads must roll.