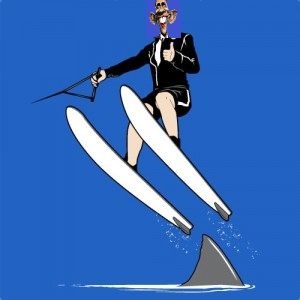 "Jumping the Shark", a term which has come to denote the beginning of a downhill slide in the quality of a TV series, originally referred to a Happy Days episode in which the character Fonzie jumped over a shark while waterskiing.  Critics claim that from that point on, the show descended into campy mediocrity.

The Right asserts:
The Left asserts:

(Cautionary tale:  Although the aforementioned Happy Days episode is recognized as the turning point in the series, it dragged-on another six painful years...)

There's a new Batman movie coming out and I hear Rush Limbaugh has compared Mitt Romney to Bruce Wayne/Batman.  Ergo, it is time to revisit one of my favorite mash-ups.  (Apologies to Herman Cain fans, but he had already dropped out when I made this.) 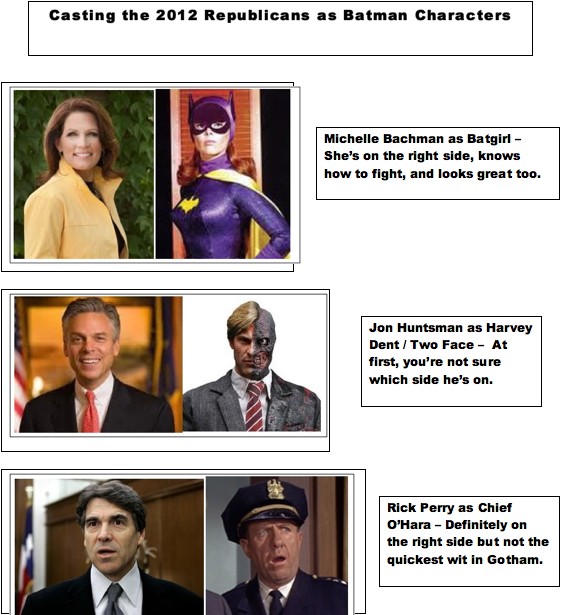 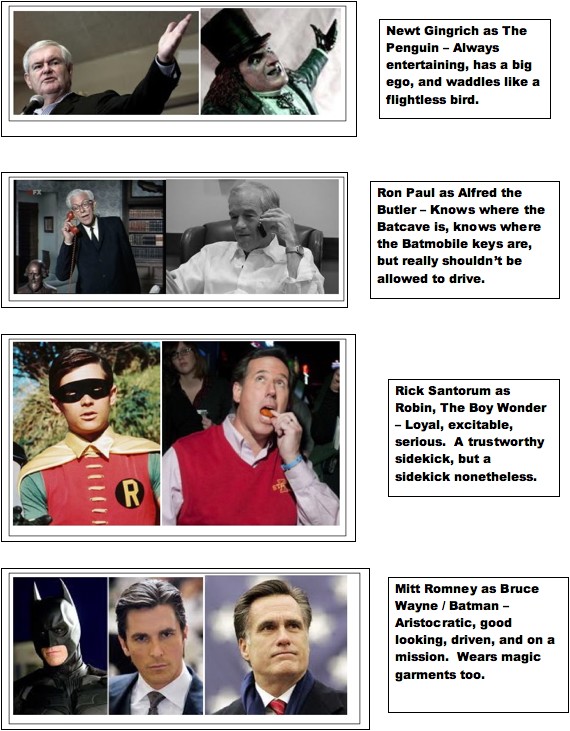 When Obamacare, arguably the most invasive legislation in the history of our nation,  passed the Senate with not a single Republican vote, I likened it to being raped and posted the "Stages of Adjustment" a rape victim goes through.  Here are a few examples:


SHOCK—Numbness - Offering information to the survivor during this stage is not helpful, as s/he will likely remember very little, if anything, about what occurs during this time period

DENIAL—“Not me, I’m fine.” “This can’t have happened!” “It’s not that bad.”  Not yet able to face the severity of the crisis, the survivor spends time gathering strength. The denial phase serves as a cushion for the more difficult stages of adjustment that follow.

ANGER—Rage, Resentment… “What did I do?” “Why me?”
A survivor’s anger may be the result of having experienced a loss of strength or loss of control over her/his life. The anger may be directed toward the offenders, a doctor, the police, or anyone else, including her/himself.

The list goes on to include the later stages: PLEA-BARGAINING, DEPRESSION, ACCEPTANCE, and ASSIMILATION.  Here's the full list.

If you felt abused by the original passing of the bill, it might feel like you've had to deal with a second assault, as if the judge made you re-enact the rape in the courtroom.

Moreover, this SCUTUS ruling is akin to trying a rape case in a Sharia court.  According to Islamic Sharia law there must be four male eye-witnesses in order to convict a rapist.  Lacking those four eye witnesses or a confession, the rape victim is found guilty of fornicating or adultery and given 100 lashes or stoned to death.  Yes, that's right, the victim is guilty despite eye witness testimony.  John Roberts would fit right in there.  Maybe we should just call him Grand Ayatollah Roberts?

(Note that this case even had its four male eye-witnesses! Scalia, Thomas, Kennedy, and Alito.  Nevertheless, the Grand Ayatollah prevailed.)