Fact Check: Did Trump Set a Trap With The Disinfectant Question? [UPDATED] 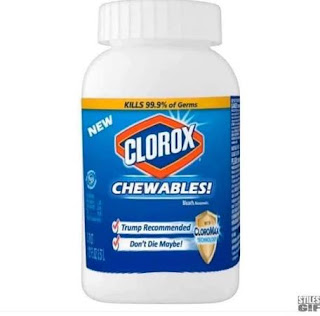 With this question, Donald Trump set off the yuuugest firestorm ever:


"A question that probably some of you are thinking of if you’re totally into that world, which I find to be very interesting. So, supposedly we hit the body with a tremendous, whether it’s ultraviolet or just very powerful light, and I think you said that hasn’t been checked, but you’re going to test it. And then I said supposing you brought the light inside the body, which you can do either through the skin or in some other way. (To Bryan) And I think you said you’re going to test that, too. Sounds interesting, right?"

"And then I see the disinfectant, where it knocks it out in one minute. And is there a way we can do something like that, by injection inside or almost a cleaning, because you see it gets in the lungs and it does a tremendous number on the lungs, so it’d be interesting to check that, so that you’re going to have to use medical doctors with, but it sounds interesting to me. So, we’ll see, but the whole concept of the light, the way it kills it in one minute. That’s pretty powerful."


Pundits, journalists, comedians, actors, musicians, ordinary folks, scientists, doctors, and even some twitter trolls, pounced!  How could he say such a thing?  Is he nuts? Is he a complete moron?  Did he just advise Americans to inject Clorox into their veins?  Could he possibly be more dangerous?  IMBLEACH!


Forget the matter of whether or not those reactions are even remotely justified by the question asked -  could Trump have actually been onto something?

Turns out the answer is... YES!

Look, I don't know if Donald Trump intentionally set a trap for the dim-witted and uninformed, but it sure looks like that's exactly what he's done. Again. Unexpectedly.


P.S. The headline above from The Daily Beast that says Trump's "...Favored Drug Is Discredited" is an obvious reference to hydroxychloroquine (HCQ) which recently got some very misleading negative press.  Is HCQ another trap?  Consider that HCQ is still the number one drug for COVID in the world, usually along with zinc and anti-biotics.  How do you think Chris Cuomo emerged from his basement unscathed?  And how about Boris Johnson?  And Justin Trudeau?  And Tom Hanks?  Not to mention whole nations.

The COVID-19 pandemic is, among other things, an historical opportunity to compare healthcare systems around the world.    Though it's still too early to draw any final conclusions, a couple of patterns have already emerged.

The graph below plots the top 40 COVID-19 countries based on their Heritage Economic Freedom ranking and their case fatality rates (CFRs) as of April 14th, 2020.  (China, Russia, and Pakistan have been left out due to unreliable data.)

You'll notice that most countries in the first two quadrants of economic freedom are tightly grouped in the bottom left corner of the graph.  Economic freedom correlates with low CFRs.  But there are also countries with very high CFRs in the free group.  In all cases, these outlier countries have the highest degrees of one-size-fits-all nationalized free healthcare, aka socialized medicine.

It seems the more nationalized and rigidly socialized a healthcare system is, the more deadly it is.  (Sorry Democrats, Progressives, and Socialists.) Meanwhile, economically free countries with strong private healthcare components are performing the best in this pandemic.  The U.S., Germany, Switzerland, Norway, Israel, and others with blended private and public healthcare systems have consistently lower CFRs than their fully socialized counterparts. 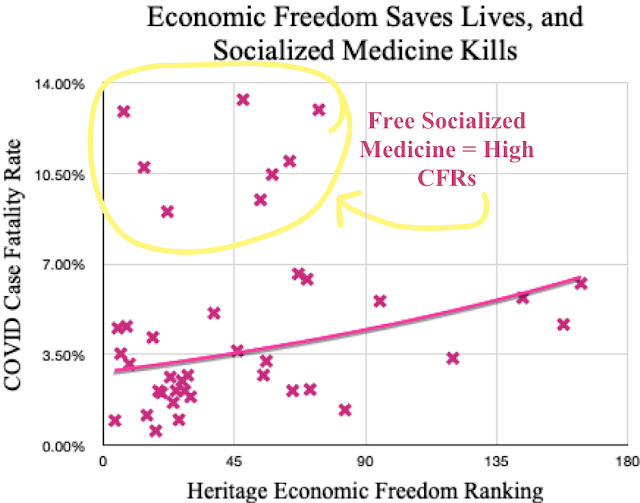 Caveats:  1. It is very early in the pandemic.  2. Each country is on a different part of the pandemic timeline.  3. Data is sketchy at this point.  4. Each country has a unique demographic mix.  5. Some countries are doing well AND have nationalized healthcare.

To be clear, every country, including the U.S., has some degree of government guaranteed healthcare. Some countries have the one-size-fits-all universal free systems, some are totally nationalized w/ a fee, some have nationalized insurance, or single-payer, some are blended public and private systems (i.e. The U.S.), and there's everything in between.

One of the big differences between nationalized countries is how they do it.  For example, total nationalization vs insurance nationalization makes a big difference.  Take Canada and UK:  In the UK, everything is nationalized - all health workers work for the national system and the facilities are owned by the system.  In Canada, the healthcare workers etc. are not nationalized, but the insurance system is single-payer. Canada has a low CFR so far, and UK is quite high.  Neither has a fraction of the ventilators or ICU beds per capita as the U.S. 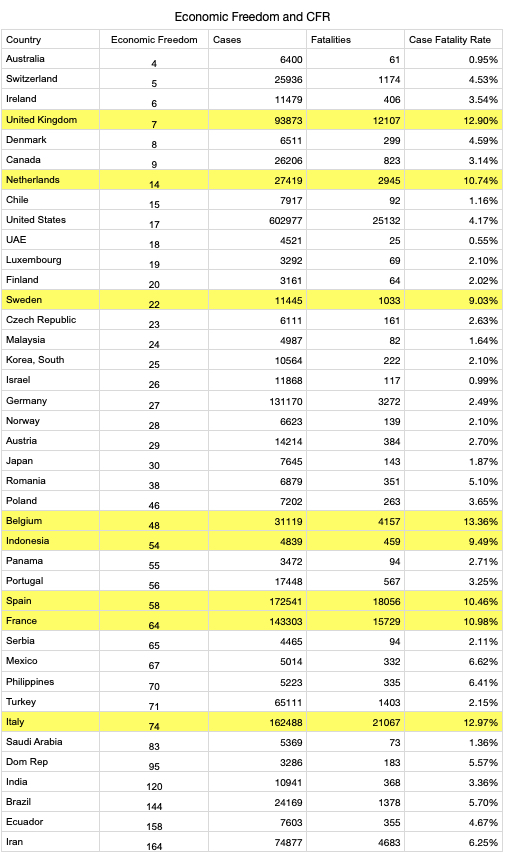