Democrats Have Seceded From The Union. What's Next? 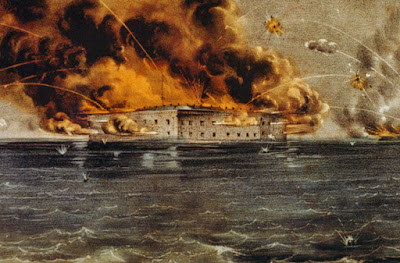 The election of 1860 was so traumatic for Democrats in the South that they began seceding from the union immediately afterwards.  But the Civil War did not start until April, 1861, when a dispute over who controlled Fort Sumter resulted in an attack by the South.  By the end of the war, 620,000 soldiers alone had died.

There's a meme that's been going around since Donald Trump's election that says, "Wow, I haven't seen Democrats this upset since we freed their slaves!"  At the risk of being melodramatic, I'd like to make the case that this is eerily perceptive.

I've written in the past that the Civil War was really about an entitlement mentality towards slavery. The South wasn't interested in abusing Africans for the sake of abusing them. It was about economics and preserving a lucrative economic system based on the slavery entitlement. The South did not want to lose its entitlement, and the Republicans, embodied by the newly elected Abraham Lincoln, were a direct and imminent threat.

Explaining secession in 1860 in terms of entitlement helps explain what is happening today with the Democrats and Donald Trump.

Democrats have gotten used to a number of entitlements, and by entitlements I'm referring to anything of value that benefits one group at the expense of another.  Here's a partial list:

Donald Trump is a threat to each of these Democrat entitlements.  His unconventional, brash, improvisational, and ultimately successful ascension to the Presidency has gotten their attention.  So they are reacting.

The Democrat response has been variously called a temper tantrum, a melt-down, a fit, a resistance, a civil disobedience movement, a protest, etc.  But what it really is, is secession.

Unlike the South, which was a geographically distinct entity, the Democrats are spread throughout the country.  This is not a physical secession like the one in 1860, but more of a philosophical one.

Democrats have seceded from the Constitution of the United States.

Of course they would disagree and say they are actually defending the Constitution.  That's exactly what the South said in 1860.

Here are some of the things prominent Democrats have done since Donald Trump's election, which mirror 1860 - '61:

So, what's the next step?  Are we headed for Fort Sumter?

Today, Democrats seceded from the entire process of advice and consent in the Senate committees, something never done on this scale in the U.S. before.

Interestingly, the  battle of Fort Sumter happened about six weeks after Abraham Lincoln was sworn-in on March 4th, 1861.  We are still less than two weeks into Donald Trump's presidency.
Posted by @RonnyReich at 10:12 AM