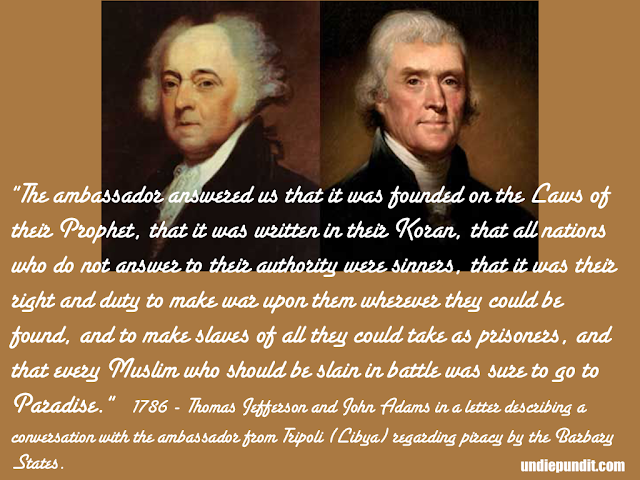 In 1987, a friend of mine from college days, named Carl, traveled to Indonesia with an Israeli friend, named David. Israelis are permanently barred from pretty much all Muslim countries including Indonesia, but David was able to visit because he also had a New Zealand passport.

Carl wrote a letter home documenting his first impressions of Indonesia, and in it he said, "On arriving, I noted that they (the Indonesians) seemed to be laid back Muslims, which David implied was impossible."

I bring this up in the context of Donald Trump's temporary pause in immigration from seven countries identified by Congress and Obama as state sponsors, or enablers, of Islamic terrorism.

Many Americans view Islam the way Carl did, as just another "laid back" religion.  And many, including the current President, have a more Jefferson, Adams, and David view.  Jefferson famously went to war against Islamic terrorism, and won.

President Trump appears to be in good company on this.
Posted by @RonnyReich at 7:46 AM