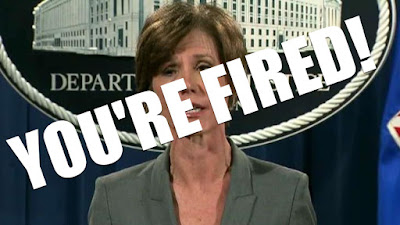 President Trump fired his first public sector employee today, Sally Yates, an Obama appointee who was acting Attorney General due to Democrats delaying Jeff Sessions.  That makes today a good time to remind readers what I wrote in July 2015 about the prospect of a Trump presidency, which at the time I thought an extremely remote possibility:

Donald Trump could be the virus that infects and ultimately kills the progressive idea that government can and should micro-manage every aspect of your life.  Sure it sounds appealing when a silver-tongued community organizer gives you a one sided utopian vision to cling to,  but how many want to sign up for that same program when the guy who says “you’re fired!” becomes boss?

Donald Trump holds people accountable.  That alone would stop totalitarianism in its tracks.  The only way the progressive takeover can continue is if a majority stays convinced they are getting a free ride in exchange for others losing their freedoms.  Trump will give no one a free ride, and everyone will be his subject.

Make Donald Trump President, and inside of four years the electorate will be clamoring for limited government once again in America.

Amen.  It may have only taken ten days!