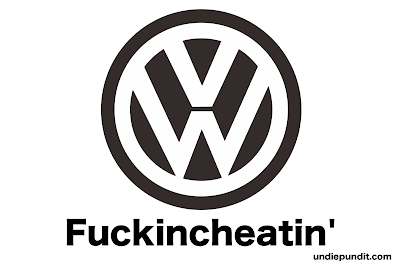 The Obama DOJ has charged six VW executives and arrested one in the diesel emissions scandal plaguing the German automaker.   In other news, Fiat Chrysler has also been accused of it's own diesel emissions cheating scandal.   Oh, and don't forget Mercedes, which is being sued over diesel emissions as well.  What's going on here?

Here's the upshot from a piece about all the diesel models NOT coming to the U.S. from a site called gas2.org:

For those of you keeping score, then, that means Volkswagen’s diesels are out. Audi’s diesels are out. Mercedes’ diesels are, apparently, on the way out now, too. As it stands, Jaguar is the only automaker ready to sell 2017 model year diesels in the US. Sure, BMW and GM (nee Chevy) are both anticipating their diesels to be cleared for sale before the end of the year. But that still just leaves Jaguar in the here and now. One brand, compared with nine brands offering twenty diesel models in the US this time last year.


In other words, passenger diesel is dead.  How GM, BMW, and Jaguar are able to continue selling them is a mystery that the others may want to solve.  For all intents and purposes, emissions laws, justified or not, have made passenger diesels in the U.S. illegal.

It's almost like a trap was set for these companies.  The government set impossible emissions standards knowing diesels couldn't meet them, and then they fine the living crap out of these (mostly foreign) companies when they get caught!

I'm reminded of the book by Harvey Silverglate, "Three Felonies a Day: How the Feds Target the Innocent." wherein he details how laws have morphed into oppressive micromanagement schemes that entrap all of us with often vague and unknowable parameters.

Car companies certainly knew what they were doing, but chose to cheat anyway because they were painted into a corner.  Businesses spend billions on R&D and cannot easily walk away from technology they spent years developing.  Somehow Europe, which runs largely on diesel power, was OK with the levels of NOX coming from these new "Clean Diesels".  Interestingly, only the U.S., which runs mostly on gas powered passenger vehicles, had a problem.

Bottom line is this:  If a majority of the companies selling diesels took the extraordinary risk of being fined, sued, arrested, and shamed in the public square instead of just walking away from the diesel business altogether, something was probably wrong with the emission standards.  Yes, I'm standing up for the cheaters, because at this point, I have zero faith in the U.S. government's ability to get anything right.