A Contrarian on Bernanke

Listen to any Ben Bernanke detractor and they’ll sing basically the same tune, which goes something like this: “Ben Bernanke is a an excellent academic economist and an honorable guy who performed well this past year as Fed Chairman, but he was right there at Alan Greenspan’s side in the early 2000’s when interest rates were kept too low for too long. Those low rates helped cause the housing bubble which eventually burst and collapsed the global financial system in 2008.  That kind of negligence should not be rewarded with a second term.”

I have trouble disagreeing with much of that, except that there is a far better and more compelling reason to lay some blame for the financial collapse with Fed Chairman Bernanke. I haven’t heard the following argument from anyone in the economic press, so that could either mean I’m out of my mind, or everyone else is missing something. Read on, and judge for yourself.

First a little history: Below is the Fed Target Rates for the last 10 years. The period most Bernanke detractors are focusing on is the period of low rates from roughly 2002 through 2004 when he was Alan Greenspan’s right-hand man. 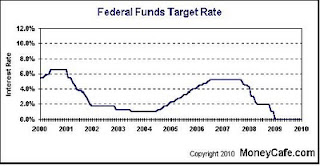 What effect did all those rate increases have on the yield curve and why would that matter? Well, as most economists will tell you, nothing screams recession quite like an inverted yield curve (when long term rates are lower than short term rates) and forcing one is economic poison.

Why did Ben Bernanke keep raising interest rates in the midst of a housing bubble, with an election coming up in November 2006, and a yield curve already threatening negative by late 2005? Why did he persist and force the yield curve decidedly negative by mid 2006 which threw us into recession and crashed the housing market? No one but Ben Bernanke knows for sure, but in my humble opinion, if there is a smoking gun against him, it is this and not the period from 2002 to 2004, before he was even Chairman!

In Hebrew, Shalom, which is Bernanke’s middle name, can mean Hello, Goodbye, or Peace. I say Goodbye, and leave us in Peace, but I don’t see that actually happening. In a political and economic climate where a tax cheat can get Senate approval to be Treasury Secretary, a reckless but honorable Fed Chairman is virtually a shoo-in.
Posted by @RonnyReich at 2:16 PM