Back during the housing bubble, counterintuitive momentum was artificially driven by a key piece of misleading information; "Triple A" ratings from government sanctioned rating agencies on mortgage securities.  We all know how that worked out.

Today the stock market is skyrocketing on, among other things, the latest GDP growth estimates that have the economy up 2.5% in the third quarter; far from a new recession.  But is this "real"?  Consider:  all government growth estimates are based on inflation adjusted dollars and the under-reporting of inflation is about...2.5%!  This figure comes from John Williams at Shadow Government Statistics who looks into these things with a particularly astute eye.  He's not alone, but you needn't listen to anyone.  Instead, look at the overall dollar-price-of-gold since 2005, the base year for these government numbers. 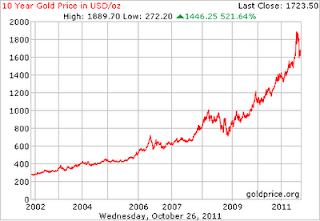 Also, ask yourself, is it possible government appointees might have an incentive to under-report inflation?  Or unemployment?  Jus' askin'.