The Scariest Graph You'll Ever See 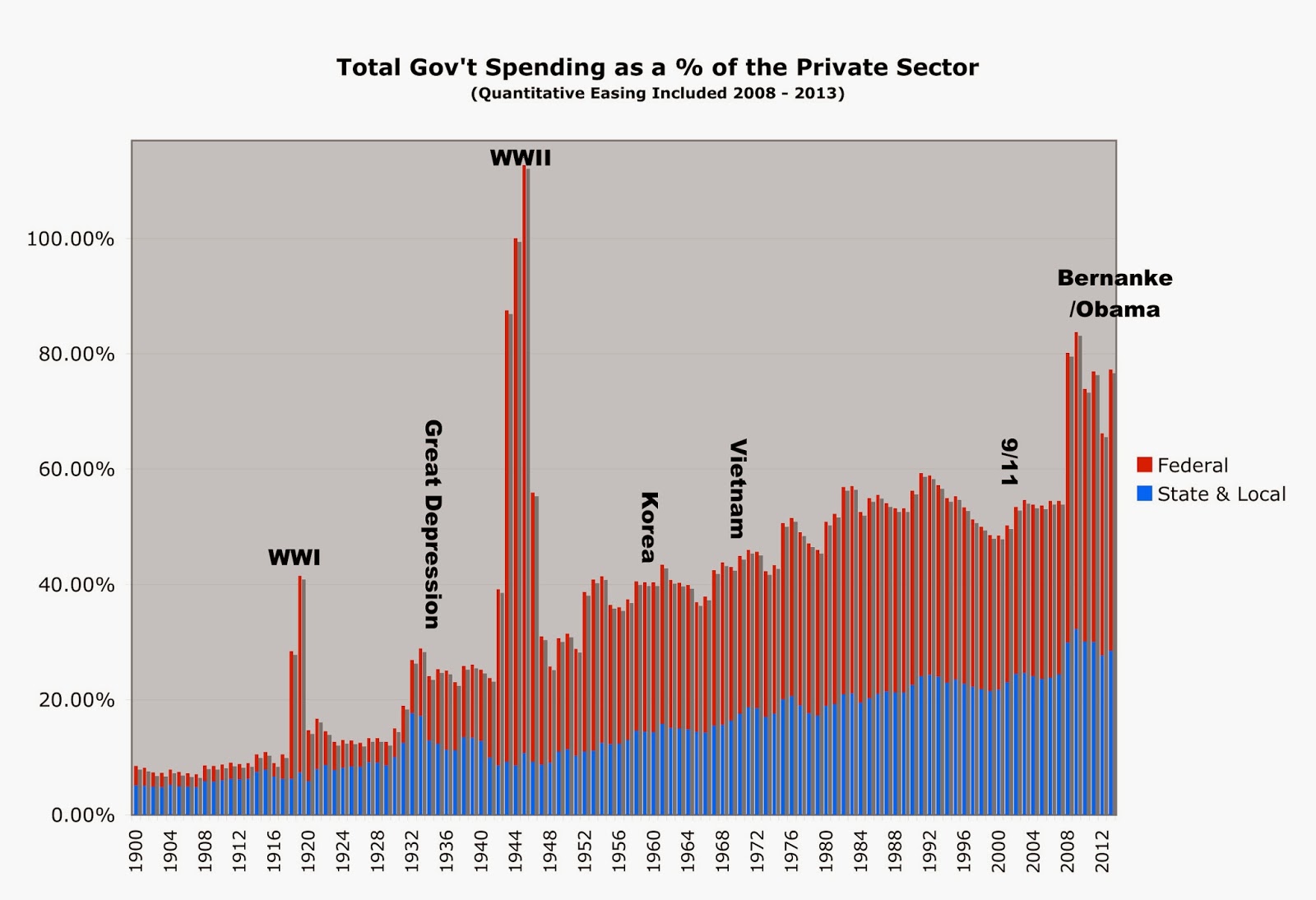 So why is this graph so scary?  Unlike the spikes during WWI and WWII, Obama and Bernanke's spike occurred during relative peacetime.   We are not fighting an all-out global war like WWI and II.  We are just spending our kids money on ourselves.   The Great Depression itself shows no equivalent spike in government spending.

Notice the three most prominent recessions in our history (Recessions appear as spikes in the blue state and local part of the graph):  two are during the Great Depression and the other is now.    Is it a coincidence that those historic recessions coincide with the ascendency of the two presidents most known for wealth redistribution, Franklin Roosevelt and Barack Obama?

People don't need graphs to sense something is wrong.  They are already doing the rational thing and dropping out of the work force.

The Federal Reserve has indicated it will continue spending $85 billion a month on its bond buying spree.  ObamaCare is shaping-up to be a budget busting, job killing, economic drain.  Could we be repeating history, only this time with a $17 or $18 trillion debt?  How long can a nation discourage its workers and maintain government spending near 70% of the private sector?

Another recession may be the least of our problems.

Notes on the graph:

Quantitative Easing I, II, and III are included in  federal spending for the years 2008 through 2013.   Quantitative Easing is not included in traditional government spending figures nor has it shown up in the money supply as of yet, because the Fed is paying the banks to sit on it.   This money, amounting to $3.2 trillion currently, is nevertheless money spent by the federal government and therefore has been included here.

I have labeled the years 2008 - 2013 as "Bernanke /Obama" and not as "Financial Crisis" or "Subprime Mess".   The recession officially ended June of 2009, before President Obama's policies had any effect.  Yet the TARP spending, Quantatitive Easing,  Stimulus, and regulatory blowout continued unabated, and in fact continues to this day.

Updated 2/18/14 to better reflect the precise timing of QEI - QEIII.