Do You Really Want to Stop School Shootings? [UPDATED] 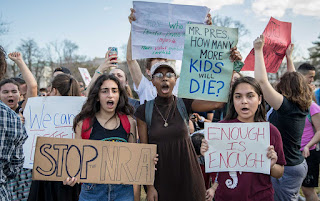 You know what they say about doing the same thing over and over again and expecting a different result?  (Hint: It’s the definition of insanity.) Here’s a radical but eminently logical proposal to finally stop the kind of school shooting that just killed 17 innocent people in Parkland, FL.:  Vote Republican!

I know, I know, you think Republicans are the problem.  Heck, they’re the NRA party, right? How can they possibly fix this?  Bear with me and I’ll explain...

Democrats have had filibuster proof majority control of the federal government for 25 of the last 100 years.  That’s 25 years where Democrats held the Presidency, the House, and had at least sixty votes, or 66% prior to 1975, in the Senate.  Republicans have NEVER had control like that in over 100 years.  The score is 25 to 0.  Without a sixty-vote margin in the Senate, there is no real “control” of the legislative agenda.

The last time Democrats had sixty votes was way, way, back during... the Obama administration.  They could have done anything they wanted on guns a few years ago!  So what did they do?  Nothing.  Absolutely nothing.

To understand why Democrats did not fix the “gun” problem and Republicans absolutely will, it is instructive to know who their respective voters are:

The Republican voting coalition is largely made-up of individuals who seek independence from the government.  Among these voters are the religious, much of the middle class, small and mid-sized business people, social conservatives, and nuclear families.  Republicans accrue power by creating more independent people.

Now, who do you suppose wants people to live in fear of someone getting into a school and killing their kids?  Could that be why Democrats did nothing when they had the power 25 years in the last 100?  Could that be why an NRA supported bill since 2007 that would have prevented dangerous homicidal maniacs from obtaining guns has never been passed?  Could that be why every time there is legislation to screen these people, Democrats insert a poison pill to kill it?

Democrats will never fix the problem because the incentives are for them to keep people scared, vulnerable, and dependent.  Give Republicans the Presidency, the House, and over sixty votes in the Senate for the first time in over 100 years and this problem gets fixed pronto (along with many others).  Or, keep voting Democrat and watch more kids die.  Your choice.

WaPo: Why Are Senate Dems Torpedoing Their Own Gun Bill?

As predicted, Democrats are killing their own "Fix NICS" bill!  They have no interest in fixing the problem because they are Democrats, and to keep power they need as many insecure, dependent, and helpless people as possible.  Fixing things is anathema to their mission.

Looking for 'solutions' to mass killings? Start with punishing failure.