VOTE! (If you can pass this quiz) 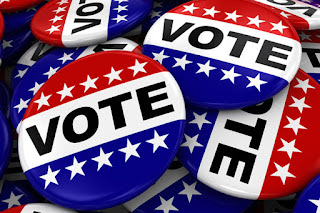 "VOTE!", we are commanded.  Every elections season we are incessantly urged to go to the polls and participate in our democracy.  That's not surprising.  The same people ordering us to vote are the ones dominating the narrative.  They think their message has gotten through and we'll vote according to their dictates. Btw, this is true on both sides of the aisle.  If a Leftist is ordering you to vote, they think you are a Leftist too.  Ditto on the Right.

I also believe you should vote, but only if you are informed enough to make an intelligent decision.  Do you know some history, some economics, and some current events (and not the "fake news" versions)?

Voting for the sake of voting without being informed is the same as investing without a clue; you are bound to lose your shirt.  I have no interest in morons choosing my government.  None at all.

So, here's a brief quiz to see if you should vote:

If you nailed this quiz, go vote.  If not, stay home and read a book on economics or history.


Answers:
1. Tina Fey said that in an SNL skit.  Sarah Palin never did.
2.  Newsweek said that.  George W. Bush never did.
3.  George W. Bush's policies did those things, not Barack Obama's, though he was in office at the time they paid-off.
4.  No President did that, including Donald Trump, who said some of the people in Charlottesville protesting removal of a statue were "fine people".  He never praised the neo-Nazis who were there.  And many media outlets falsely accused Trump of mocking a reporter's handicap by gesticulating in a spastic manner, which he DID do, but A) the handicapped reporter was not spastic, and B) Trump uses that spastic gesture ALL THE TIME, and even used it earlier in the same speech when referring to indecisive military Generals.