My Op-Ed to WaPo's: "Americans are suffering. Trump offers them a doctor who warns of sex with demons." 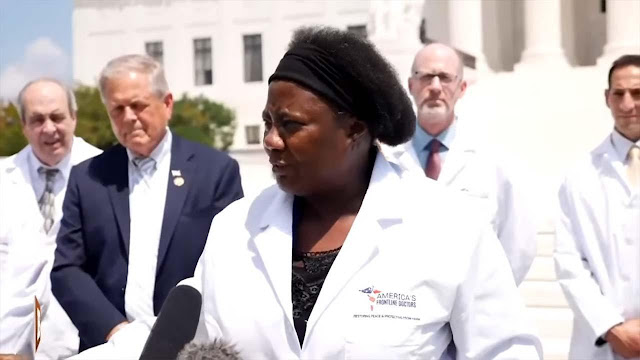 Here's my op-ed:  (Originally slated for Facebook to those promoting this WaPo smear, but I'm weary of playing the skunk at the leftist picnic. And that's what FB is.  Luckily, I have a blog.)


Some thoughts: 1. This doctor is a black woman.  She treats patients daily at her clinic.  Many have COVID.  She's been successful using Hydroxychloroquine.  Who are you to question her clinical experience?  2. Did it ever occur to you that when she refers to "demon sex" or "alien DNA" she is speaking to a similarly African religious population?  Who are you to judge the idioms of the African religious community?  3.  Are you aware that Hydroxychloroquine belongs to a class of drugs that has been around for centuries and probably millennia?  Did you know Alexander Hamilton was cured of Yellow Fever in 1793 using quinine and Madeira wine (high in zinc)?  Do you know that centuries of science are on her side, not yours?  Your snarky condescension towards this Black, African, female, religious, doctor, reeks of racism, sexism, white privilege, small-mindedness, cultural superiority, religious intolerance, entitlement, and ignorance. You remind me of those Japanese soldiers stranded on Pacific Islands who had no idea WWII was over.  Only the islands you are stuck on are information islands like WaPo, NYT, CNN, NPR, etc., and all the digital media who censored this courageous truth-telling doctor.  But it might be even worse.  You probably know that she and centuries of science are right about HCQ.  You probably know that Donald Trump was right about HCQ.  But you don’t care.  Instead, you shout them down like lunatics. Here’s your sick calculus: sacrificing a few hundred thousand more lives to elect Joe Biden's animated corpse in November is worth it to you because you want power more than anything. In which case you are the very demons Dr. Immanuel was referring to, and no one should have sex with you.  (I'll see myself out...)   Undiepundit.com
Posted by @RonnyReich at 12:49 PM