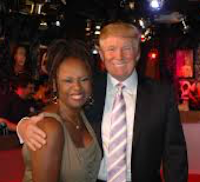 Donald Trump is the Howard Stern of politics.  He’s a shock jock in a field of politicians who sound like boring newsreaders.  He opens his mouth and out comes ego, shameless self-promotion, outrageousness, braggadocio, and downright meanness towards his detractors.  But there are other things too which endear him to his audience.   He’s fearless, confident, unapologetic, and says things no one else has the cojones to say.   And he's entertaining.  In other words, he’s exactly like Howard Stern.  His fans are the same too.  Listen to them talk and you'll find yourself expecting them to blurt out “Baba Booey!” any second.


(I posted this originally on 7/21, and in light of everything since, including the debates,  it holds-up pretty well.  Lately Trump has been taking on Megyn Kelly with his characteristic meanness, and Carly Fiorina is having none of it.  I can't think of two women I'd rather not cross more than those two.  Nevertheless The Donald Trump Show will continue and we will all be diminished by it.  Everyone that is except the Clintons who more and more appear to be the architects and beneficiaries of this risible show.)
Posted by @RonnyReich at 8:28 AM