The Fed and Free Markets 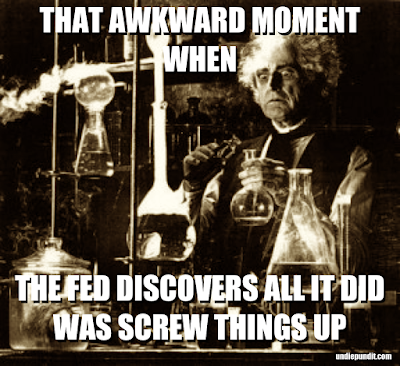 Once again The Federal Reserve is stuck in the unenviable position of taking candy from the spoiled brat it created.  They've been jawboning about raising interest rates for so long I've lost track, yet they never fail to find excuses for postponing.  Meanwhile the spoiled brat keeps getting fatter, closer to type II diabetes, and more ill tempered with every passing quarter.

This reminds me of the similarly irresponsible Fed actions of 2005 - 2006.  In that case the Fed didn't just take candy from the brat, they went on to stomp on it's windpipe!  Forgotten in the blur of deceptive history is how the housing bubble, which the Fed helped create, came to collapse so violently and led to the financial crisis of 2008.

From 2005 - 2006 the Fed raised interest rates from 1% to 5.25%.  That was an increase of 425%! Housing prices, being inversely related to mortgage rates, promptly crashed.   It need not have happened that way.  The fed acted irresponsibly.

Now they are being overly cautious and inflating bubbles in equities, real estate, mergers, debt, etc. Much of the risk is once again concentrated in the federal government.  Fannie and Freddie own just about every mortgage written since 2008.  The Federal Reserve now owns over four trillion dollars of interest rate sensitive securities.  Plus, the rising dollar is squeezing exporters which would only get worse if the Fed normalizes.

Remind me again how we've got a free market economy in the U.S.?