Behold the President of United States, under oath of office to "Preserve, Protect, and Defend The Constitution of The United States", as he openly encourages voter fraud.  The interviewer asks about voting while "undocumented", and Barack Obama unequivocally condones it.  He says, "If you want to vote... they can't stop you."  Then he repeats it so no one will misunderstand his message.  How is this not treason?

Other than the fact that Obama is now stating this publicly, this strategy is nothing new.  In fact it goes back a half a century.

In 1966, Richard Cloward and Francis Fox Piven laid out a strategy to destroy the United States by overloading the system with dependents.  Barack Obama studied under Cloward and Piven as a student at Columbia University in the early 1980s.

But Obama was not their only pupil.  In 1993, Bill Clinton signed into law something called "The Motor Voter Law", which attached voter registration to drivers licenses and other unrelated government interactions.  The plan was to encourage illegals to register, after which it would be impossible to prevent them from voting.

Here is Bill Clinton signing the Motor Voter law with Cloward and Piven standing behind him. (Richard Cloward is in the light grey suit, and Francis Fox Piven is in the green coat.) 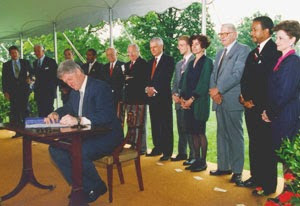 Now do you understand why Democrats, including Hillary Clinton, want open borders and no voter ID?