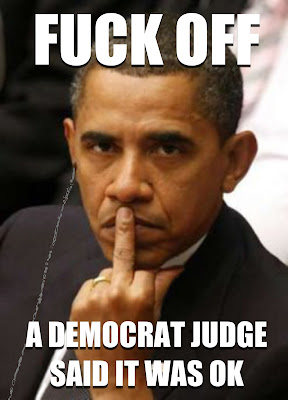 Barack Obama's response to the allegation that he wiretapped the Trump campaign is curious for three reasons.  Here's the response:

First, he does not deny the wiretap.
Second, the only thing he does deny is ordering it, which is not surprising because only a FISA judge can order one.
Third, he attributes the wiretap to the DOJ, which of course is Loretta Lynch who famously met on the tarmac with Bill Clinton during the campaign.

The Clinton/Lynch tarmac meeting occurred on June, 26th.  Also occurring in June (exact date unknown at this time) was the initial FISA wiretap request, which was reportedly turned down.  It was rewritten and resubmitted in October when it was alleged to have been approved.

There are two possible outcomes to all this:

1.  Donald Trump has some kind of concerning relationship with Russia - as agent, dupe, pawn, etc.


So, if number two is true, why use Russia?


Make the enemy live up to its own book of rules.

Whenever I'm puzzled by something Obama does, I always find an answer in the teachings of Saul Alinsky.  In the above rule from "Rules for Radicals", Alinsky is recommending a kind-of Judo strategy.  In other words, use your opponents inertia against him.

In the 2012 debate with Mitt Romney, where Romney fingered Russia as the #1 geopolitical foe of the U.S., Obama famously snarked that the "1980s called and want their foreign policy back."  By using Russia, Obama and the Democrats know that a certain number of Republicans will forgive any transgressions and even go along with things like wiretaps because, hey, it's Russia.  Of course we should wiretap and investigate anyone colluding with those nasty Russians, they'd say!  Couldn't you see Barack Obama calling Mitt Romney as a character witness during his trial?

All I know is this:  the deeper you dig, the "curiouser" this gets.  And as long as the Democrats and their media outlets keep using the Russia smear to effectively undermine Trump and his agenda, this isn't going away.
Posted by @RonnyReich at 12:34 PM