The news today is that according to an unconfirmed report, DNC staffer and murder victim Seth Rich may have contacted WikiLeaks shortly before his murder.  Immediately after his murder, Julian Assange suggested Rich was his source and offered a reward for information leading to his killer.

Additionally, the source of the new unconfirmed report said the DC police had been instructed to "stand down" in their investigation of Rich's murder.   Remember,  Rich was murdered two weeks before the DNC emails were released by WikiLeaks. 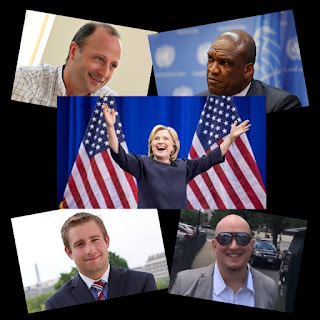 An intruder was spotted today, August 22nd, trying to scale the walls of the Ecuadorian embassy in London where Julian Assange has lived for the last four years.  The intruder successfully escaped capture.

This is significant because four people with access to information potentially damaging to Hillary Clinton have assumed room temperature in the last four months.  All under mysterious circumstances.

John Jones (upper left), lawyer for WikiLeak's Julian Assange, was mysteriously struck and killed by a train on April 21st in London.

John Ashe (upper right), an ex- UN official, was about to testify in a case that involved the DNC and certain Arkansas connections of the Clintons when he was found dead in his home gym on June 22nd.  His throat was reportedly crushed by a barbell.

Shawn Lucas (lower right) was found dead on August 2nd.  Mr. Lucas made a video that went viral showing him serving a lawsuit against Hillary Clinton and DNC Chairwoman Debbie Wasserman Schultz. There are no reports yet of how he died.

Some have suggested I am engaging in "conspiracy theories" by listing these four mysterious deaths and noting their Clinton connections.  I am doing no such thing.  I am proposing no theories. Everything stated above is fact.  If you see a conspiracy here, that's on you.

If I was engaged in conspiracy theories, at a minimum I'd have mentioned the mysterious 1993 death of Clinton lawyer Vince Foster.  I purposely did not.  Nevertheless, there are conspiracy theorists out there who suggest the Clinton body-count numbers about fifty.  Here is a short list.

Here's the bottom line:  To this date there are no credible murder allegations against the Clintons, after almost four decades of public life.  There are, however, several credible rape allegations.   Oh, and also: abuse of power, perjury, witness tampering, felony mishandling of classified information, felony government records destruction, intimidation... (I'm sure I"m forgetting some).  Other than that, the Clintons are squeaky clean.