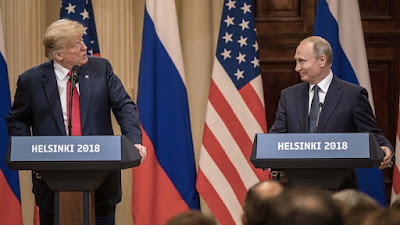 It may not feel like it, and headlines notwithstanding, but Trump was handed a huge victory in Helsinki.

The hyperbole from Democrats, Never Trumpers, and many past supporters reads like a thesaurus of condemnation. He's committed treason, high crimes, anti-American acts.  He's clearly Putin's puppet, is colluding with Russia, is afraid of what they have on him.  He is unqualified as Commander in Chief, is in over his head, is a joke on the world stage.  He should be impeached, imprisoned, overthrown in a military coup.

What did he do to earn these indictments?

First he was asked by a journalist to call Vladimir Putin a liar to his face.  Trump refused. He knew it was a trap.  Think of it:  Trump is there to establish detente with a temperamental nuclear adversary. An adversary, by the way, which the Democrats have declared war against because they think Russia jacked their emails.  Trump is there acting as a diplomat to cool these tensions.  What purpose would it serve to call Putin a liar to his face?

Second, Trump refused to emphatically endorse the assessment of the intelligence community regarding Russian meddling in the election.  This is another trap that Trump was unwilling to walk into.  Why would he delegitimize his own presidency?  And didn't the FBI's counter intelligence chief, Peter Strzok, just spend ten hours lying in front of a congressional committee?  Who could endorse such dishonesty?  Anyone paying attention knows that the intelligence community has been plotting a coup d'etat against Trump since he came down the escalator!

So he avoided two traps by equivocating in a typically clumsy Trumpian word salad fashion.  Just like he does every day!  Is this an impeachable high crime?  Hardly.  The American people can see that Trump's critics are falling into a virtue-signaling vortex.   It's a mob mentality.

Take his actions regarding Russia. Trump has been tougher on Russia than any president in my lifetime.  He has hurt Russia by working towards making the U.S. the worlds largest energy producer, re-building our military, re-building NATO, defeating ISIS, standing up to Putin in Syria, standing up to Iran, supporting Israel, strengthening our economy, asserting our power at the UN, strengthening the dollar, and much more.  What's more important, the atmospherics or the results?

Conversely, Obama was caught on a hot mic signaling secret concessions to Vladimir Putin.  Did the pop media condemn this behavior?  No, they covered it up!

Americans can sense hysterical over-reaction and mob virtue-signaling.  Once again, Trump's critics have crossed a line and handed him a yuuuge victory.  They constantly do this and never learn.  I expect his poll numbers to unexpectedly go up once the dust settles on this episode.

As predicted, Trump's approval rating ticked up in the latest NBC/WSJ poll, half of which was taken after the Hilsinki summit.  Trump is extremely lucky to have such inept opposition.