Hollywood Gets the Story Wrong - Again 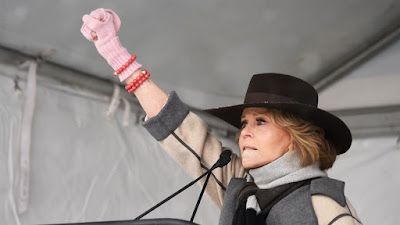 You would think people who tell stories for a living would be able to tell truth from fiction.  You would be wrong. A good case in point is the Sundance Film Festival which just wrapped-up in Park City, Utah.

As is now expected in the age of Trump, there was an anti-Trump rally down Main Street protesting against sexual abuse, Trump, fascism, fascist Trump, and Trumpist fascism.  Speakers included Jane Fonda, Lena Waithe, Tessa Thompson, & Gloria Allred, who led the crowd in a chant of "Resist, insist, persist, insist, and elect".

Hollywood, and the arts community in general, support the Democrat party with near exclusivity, and they hate Donald Trump with white hot passion and call him "fascist". Yet, it is under Democrats that the heavy hand of government interferes most with the work of people exercising their right of free speech. Richard Nixon may have contemplated using the IRS to go after his enemies, but he never did it, and could not have gotten away with it.  Hillary Clinton and Barack Obama not only did it, but they got away with it. To this day no one holds them accountable - not the media, not the public, not academia, and certainly not Hollywood.

To keep the flame of truth at least on pilot, below is a partial list of filmmakers, the very people celebrated at Sundance, who were jailed, persecuted, audited, and harassed under Barack Obama for political purposes:

Dinesh D'Souza:  There is mounting evidence that Dinesh D'Souza was specifically targeted by Barack Obama.  He was basically imprisoned for a minor campaign finance violation, giving $20,000 to an old college friend while the legal limit was $5,400. More importantly though, he made a couple of anti-Obama films in 2012 and 2013.  As a result of the ostensible campaign finance violation, he was confined for eight months, put on five months probation, and forced to undergo psychological counseling.

Mr. D'Souza was the first person in the history of campaign finance law ever to be confined for an offense such as this.

Nakoula Basseley Nakoula was put in prison for a year as punishment for making the YouTube video famously blamed by Hillary Clinton and Barack Obama for the deaths of four Americans in Benghazi, Libya.  There's only one problem: the video had nothing to do with the attack in Benghazi.

Hillary Clinton promised the grieving families of those killed that she would imprison Mr. Nakoula despite that pesky thing known as our first amendment right to free speech.  And Hillary Clinton and Barack Obama both knew the video was not responsible. Secretary Clinton emailed her daughter, Chelsea, right after the attack saying that the attack was an al Qaeda-like terrorist operation.  Another email, to the Libyan President,  confirmed that this was her official understanding of the events in Benghazi.  Yet publicly, and even to the families of those who died, she and Obama blamed Nakoula.

The sad and tragic reality is that Hillary Clinton and Barack Obama jailed a filmmaker for a year to cover for their failure to provide the necessary security in Benghazi, to add legitimacy to their lie about the attack being about a video, to maintain the fiction that they had defeated terrorism, and to deceive the American people before an election.

David Daleiden and Sandra Merritt:  These people were behind the Planned Parenthood undercover videos made by The Center for Medical Progress.  Barack Obama himself made a point to single them out.  As part of their cover they used fake IDs that somehow became a pretense for felony charges, a raid on Daleiden's home, and seizures of his property.

Recently, all charges in Texas were dropped against Daleiden.  But the damage was done, his funding was depleted, and CMP was sidelined.  Ultimately, the harassment was a success from the Democrat standpoint.

Joel Gilbert:  Mr. Gilbert made an anti-Obama film called "Dreams From My Real Father".  It drew the ire of Democrats on the Federal Election Commission (FEC) who voted unanimously to punish Mr. Gilbert.  When Republicans stood firm and pointed out that liberal filmmakers such as Michael Moore were not similarly harassed, the punishment was eventually blocked.  Were it not for the split FEC, Mr. Gilbert would have been sanctioned simply for making a movie critical of Barack Obama.

James O'Keefe, Joseph Basel, Robert Flanagan, and Stan Dai: These people were part of James O'Keefe's undercover video organization, Project Veritas, the organization that single-handedly took down one of Obama's favorite community organizer activist groups, ACORN. They went on to investigate Democrat Senator Mary Landrieu and ran afoul of the FBI while trying to make a film about her. They eventually settled for misdemeanor charges and accepted probation, fines, and community service.

O'keefe has also been harassed by Obama's DHS for making films about the open Mexican border, and was just blocked by Twitter for releasing videos critical of Democrats and Hillary Clinton.

Logan Clements: Mr. Clements made a movie called "Sick and Sicker...", an unflattering portrayal of Obamacare.  For his disloyalty he was handed his first ever IRS audit.

Breitbart News:  Breitbart News also earned their first IRS audit.   Breitbart is a multi-media internet megaphone that is foursquare opposed to Clinton and Obama's policies.  In this election cycle they are all-in with Donald Trump.  (Also, see David Bossie below who contributes occasionally to Breitbart.)

Glenn Beck, Pat Grey, and Scott Baker:  Glenn Beck and his Blaze Network don't just make videos, they have an entire broadcast network, publish books, run a website, and do talk radio,  all of which oppose Clinton and Obama policies.  So yeah, these guys all got their first IRS audits .  But that's not all.  Glenn Beck's top sponsor, GoldLine, was targeted by Democrats, specifically congressman Anthony Weiner, husband of Hillary's right hand person Huma Abedin, and a known political hit-man for Democrats and Obama.  Weiner resigned his House seat in scandal, but his (ex?) wife will play a major role in a possible Clinton administration.

David Bossie and James Bopp:  These men were behind the Citizens United SCOTUS case. David Bossie runs CU and James Bopp was the lawyer who defended the first amendment. The case centered around CU's right to make and show a film, in this case an unflattering portrait of Hillary Clinton. They won the case at the SCUTUS, but ran afoul of Obama and the entire Left who believe the first amendment only applies to Michael Moore and The New York Times. Hence, in front of the entire world, during a state of the union address, Barack Obama publicly berated the justices who upheld the first amendment rights of filmmakers, thus sending a message to justices, filmmakers, and supporters of people who make films: oppose me and I will use the Bully Pulpit to bully you.

Fox News:  No list like this would be complete without mentioning Obama's number one target in the media and film world.  Fox has been singled-out and harassed personally by Barack Obama on numerous occasions.  These attacks send a clear and chilling message to sponsors: Advertise on Fox and you will be the target of restrictive regulations, IRS audits, and federal harassment.  Some were targeted, like Gold Line mentioned above.

Donald Trump talks about "fake news", mentions specific outlets like CNN and the NYT, but takes no action against them.  That's how free speech is supposed to work.

Barack Obama and Hillary Clinton took concrete actions and weaponized the federal government against their critics.  That is the very essence of fascism.  Perhaps someone in Hollywood could make a movie about that, but I won't hold my breath.