What Exactly Is a "Shithole Country"? 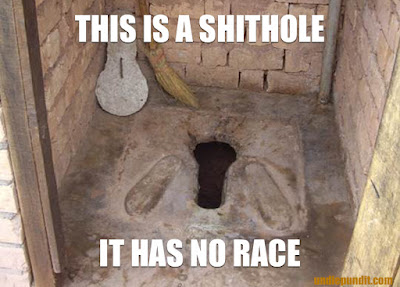 Today's episode of exploding heads has to do with Donald Trump labeling certain countries, "shithole countries".   So, what does that mean?

Donald Trump is a famously guileless person - he speaks his mind.  And the mind he speaks relies on the colorful patois of the common man.  Don Jr. accurately calls his dad a "blue collar billionaire".

With that background, we can safely assume that the President was referring to countries where people routinely defecate in holes.  The only question remaining is, does that apply to Haiti and some African Countries?

According to the World Bank, under 30% of Haitians have improved sanitation facilities.  It's worse in many African countries with some around 10% and only the highest hitting 30%.  Over 70% of these people actually shit in a hole!

Meanwhile, 100% of the population in the U.S. has access to improved sanitation according to the same study.  Donald Trump's own sanitation is so improved it's apocryphally gold plated.  Is anyone surprised that a man imagined to sit on a golden toilet is concerned about an invasion of folks who poop in pits?

So, what Donald Trump said is factually accurate.  It's provable.  It may be blunt, crude, and offensive to those who want to see racism everywhere, but it's undeniable.  It's science.

If your head is still exploding, then you, my friend, are a science denier.
Posted by @RonnyReich at 10:17 PM