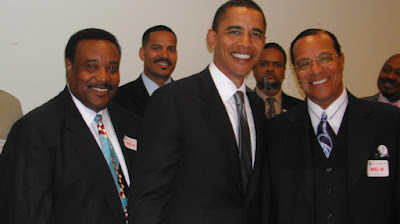 Today's example of this is the above photo of Barack Obama grinning from ear-to-ear with anti-semite, racist, radical Muslim, Louis Farrakhan. The photo was kept secret throughout Obama's two campaigns and terms as President:  (from: TPM)


The photographer, Askia Muhammad, told the Trice Edney News Wire that he “gave the picture up at the time and basically swore secrecy.”

“But after the nomination was secured and all the way up until the inauguration; then for eight years after he was President, it was kept under cover,” Muhammad said.

Asked whether he thought the photo’s release would have affected Obama’s presidential campaign, Muhammad said, “I insist. It absolutely would have made a difference.”


This allows me to repost this thought from the time President Barack Obama came out in favor of building a mega-Mosque at the site of the 9/11 Islamic terror attack in NY:

Now that President Obama has come out in favor of the mega-mosque at ground zero , it opens up an opportunity to combine some of the Prez's most important priorities into one neat solution!

Recall that the head of NASA, Charles Bolden,  revealed to Al Jazeera that Prez Obama has directed NASA to make it's "Primary Mission"... outreach to Muslims!  Not exploring space, not doing science, not helping our military.  No, the primary mission of NASA is helping Muslims!

Recall also that Louis Farrakhan and his Nation of Islam (Obama is a supporter and ally) believe that there is a spaceship called the  "Mother Wheel" which orbits the planet and...well, nevermind.

So let's see, we need a giant place for Muslims to worship, check, we have the full resources of NASA, check, and there is already a Mother Wheel circling the planet, check mate.  Hmmm, I love it when a plan comes together!