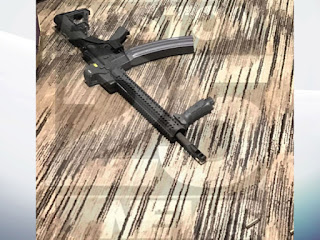 What if the 2nd Amendment was the ultimate target in Las Vegas?  What if the Las Vegas shooter really hated the 2A?  I mean, really hated it. Would he have been willing to kill?  Would he have been willing to die?  What better way to demonstrate that the 2A is prone to abuse than by amassing an arsenal?  Why have an arsenal when one modified gun was enough? [Update: Apparently, heat build-up prevents a single gun from firing reliably for more than a clip before cooling.]    What better way to illuminate a  "bump-stock" loophole than to use one in a massacre?  (Had you ever heard of a "bump-stock" before this?)

Next, how would a 2A opponent pick a target?  Would he perhaps apply the Saul Alinsky rule for radicals:  "Make the enemy live up to its own book of rules."  Aren't country music fans among the biggest supporters of The Bill of Rights? [Update: Shooter considered several other music events other than this country festival.]

Finally, if the 2A was the target, would the shooter openly admit it, or would it better suit his purposes to cover his tracks?  Would he perhaps turn to radical Islam for cover?

I'm raising these questions only because we are dealing with a conspicuous lack of information.  Unlike every other event of this kind, we have no good answers four days in.  Social media is non-existent or on lockdown.  YouTube videos have been flushed down the memory hole.  Digital footprints are either nonexistent or have been erased.  The public information trail, for whatever reason, has been rendered cold.

Could the reason for this be that the truth goes against the Left's preferred narrative? Could the shooter, a middle-aged white guy, have been a Leftist 2A opponent? [Update: Still no inkling of ANY political or religious leanings four days in.]

What we do know about the Left is they are adept at using various diabolical techniques to achieve their goals.  Among them is a technique they have dubbed "bird-dogging".  The name comes from a hunting technique that employs the use of a dog sent into a thicket to stir up birds for the kill.

As if right on cue, the 2A hunters on the Left have dutifully been firing away at the 2A, NRA, and guns nonstop since Sunday.  I'm not suggesting any kind of coordination with the DNC, Democracy Partners, Americans United For Change, People For The American Way, Center for American Progress, or any other Leftist action group. Only that this guy may have decided on his own that the ends justify the means, to use another Alinsky-ism.

Either way, it's possible both are true.  It's also possible there was no motive other than psychosis.  Of note:  ISIS includes the hashtag #GunControlNow on their posts taking credit for Las Vegas.  Which begs the question: who's bird-dogging who?  (see below) 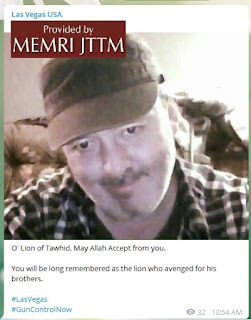 With the digital trail non-existent, or wiped clean, we are left speculating to try and find a motive from the bloody breadcrumbs left in the wake of this horrific act.
Posted by @RonnyReich at 2:22 PM