If you have been consuming news reports - print, online, broadcast, whatever - concerning the Las Vegas shooting, you've probably heard the "fact" that the shooter has been accumulating an arsenal over decades.  Here's a screen shot of a Google search for "arsenal & decades": 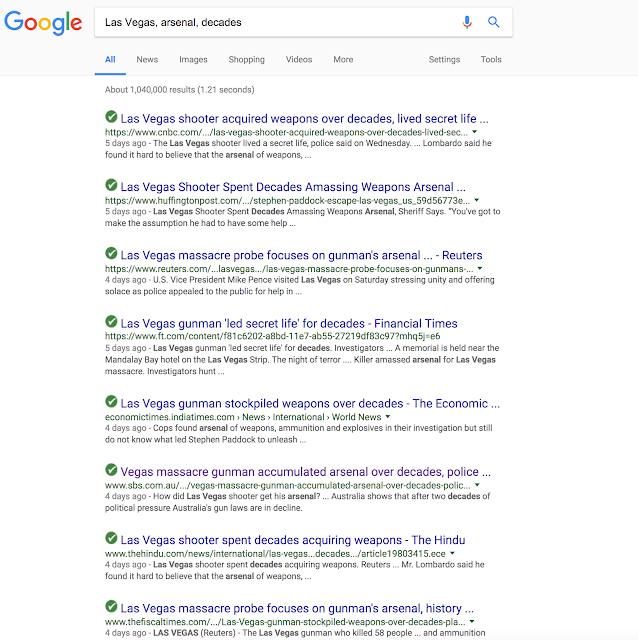 This timeline came from the Sheriff himself on Oct 4th:  “What we know is Stephen Paddock is a man who spent decades acquiring weapons and ammo and living a secret life. Much of which will never be fully understood”

There were, however, other reports that referred to the bulk of the arsenal having been accumulated "in the last year".  It's not unusual in the fog-of-war to have discrepancies like this, but what is unusual is the apparent lack of curiosity in the precise gun purchase timeline.

The ATF has said, in fact, that 33 of the shooters 47 guns were purchased in the 11 months from Oct 2016 to Sept 2017.  If they know this, then they also know the exact timeline and makeup of those purchases.  Were these purchases evenly spaced or did the pattern change at some point?  Was the entire makeup of those purchases consistent with what was used in the massacre?  Was there an inflection point in the shooters gun purchasing behavior over the last year?  If there was one, the ATF isn't saying.

At some point, without a clear motive, we are inevitably drawn to Occam's razor.

[Update 10/11] According to this report (and really, with a timeline that changes daily, what can we really trust at this point?),  every single gun used in the massacre was purchased AFTER Nov 2016. The exact timing and makeup of the guns purchased and used is still a well kept secret.  Of note, ISIS claims conversion to Islam about six months ago.  Of course, there was also a big event in Nov 2016. And the LVMPD still will not discuss what medications the shooter was on, though they've hinted it was more than Valium.
Posted by @RonnyReich at 7:47 PM