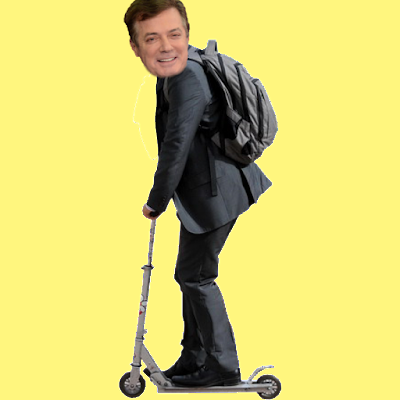 The last Special Counsel, Patrick Fitzgerald, had one job - prosecute the person who leaked the name of  CIA employee Valerie Plame.   It was a pointless exercise in the first place because: a) Valerie Plame was not a covert CIA operative in any danger from having her identity revealed, and b) the "leaker" was a person named Richard Armitage who Fitzgerald knew to be the leaker from the start. But that didn't stop Patrick Fitzgerald from his real job, which was to take-out the Bush administration, a job assigned to him by none other than his close friend, acting Attorney General James Comey.  Yes, that James Comey, close friend of Robert Mueller and nemesis of Donald Trump.

After an extensive four year investigation that gave Democrats false hope that George W Bush or Dick Cheney would land in prison, Patrick Fitzgerald indicted I. Lewis "Scooter" Libby for mistaking one moon faced TV commentator for another.  Though he had nothing to do with leaking Valerie Plame's name, Scooter Libby was criminally charged with perjury for confusing Tim Russert with Chris Matthews.  He was convicted and disbarred, though he won back his right to practice law nine  years later, in 2016.

Patrick Fitzgerald aimed for the King and shot a Pawn.

The indictments by Robert Mueller yesterday appear to be more of the same.

Mueller's real job, like Fitzgerald's, is to go after the King.  Instead, it appears he got three Pawns.

But there is one BIG distinction between this investigation and the last one:  a Democrat named Podesta resigned from his eponymous lobbying firm yesterday as a result of the Mueller investigation.  Hmmm...Podesta...Podesta...where have I heard that name before?

Oh, I remember!  Tony's brother, John Podesta, ran Hillary Clinton's campaign, founded the left wing Center for American Progress,  was counselor to President Barack Obama,  is partners with his brother Tony, and is as embedded in Democrat politics as any man alive.

Of course it is impossible to know where this all leads, and Robert Mueller could be a thorn in Trump's side for the entirety of his Presidency, but so far this investigation has netted three Republican Pawns and one Democrat Rook.  For those of you keeping score at home, in chess terms that's -3R to -5D.
Posted by @RonnyReich at 12:37 PM