Who was the shooter? [UPDATED]

Have you noticed the dearth of information about the Las Vegas killer?  It's uncanny.  No social media, no politics, no religion, no manifesto, no affiliations, nothing but dry and sketchy details about his past and present.  It's almost like the media is not looking, or has looked, and doesn't want to share what it knows.

Do you know any 64 year olds with no opinions on politics or religion?

Meanwhile, the girlfriend is mysteriously out of the country, $100,000 wired to her, but she's emphatically NOT a person of interest,  her FaceBook account has been frozen, but there are some photos of her in Dubai.

We are going to need some time to sort all this out, but in the meantime 4Chan is hard at work:

[Update: This person is in all likelihood NOT the shooter.]

There is footage (since flushed down the memory hole by Google/YouTube) of a guy at an anti-Trump rally in Reno this summer who is apparently named "Steve" (some women can be heard greeting him) wearing a pussy hat and a Nasa tee shirt (apparently the shooter worked for a time at Lockheed Martin, a Nasa contractor).  Some 4chaner has looked at the available photos and finds a curiously similar scar on both the pussy hat guy and the shooter.

Of course, this is all conjecture and highly speculative, but if true explains why the media is not ever going to look into this guys politics or religion and why he just happened to murder a slew of flag-waving, patriotic, country music fans. 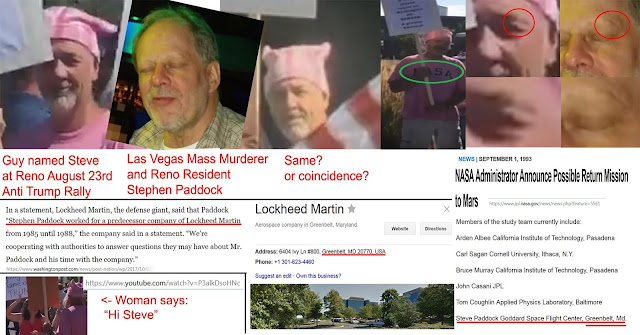